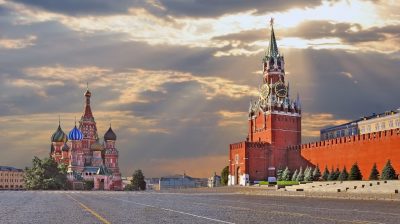 The ruble has put in a surprisingly strong performance in recent months despite the collapse in oil prices
By Dmitry Dolgin chief economist Russia at ING in Moscow May 12, 2020

The Central Bank of Russia (CBR) will make FX sales of more than $2.6bn in May, lowering the risks of a weaker ruble.

The central bank's involvement on the FX market should downsize to the current requirements of the Finance Ministry (MinFin), as the bank's additional FX sale obligations are close to purchase backlogs. This lowers the chances for a stronger ruble as well.

MinFin announced sales of FX (off-market transactions with the CBR) amounting to RUB193bn, or $2.6bn under current exchange rates, for the period of 13 May to 4 June.

The sum is below our and consensus expectations of $3.5-3.7bn, and, more importantly, smaller than MinFin's own guidance. According to the latter, under an average Urals of $16 per barrel (bbl) in April, the next month's fuel revenue undercollection for the budget would total around $3.5bn, or $1.2-1.5bn per each $10 Urals price below the $42.4 cut-off level.

The discrepancy in the actual data suggests that the fuel revenue collection in April may have still benefited from the long-term delivery contracts.

Meanwhile going forward, some negative adjustments are possible depending on the Urals price environment and Russia's compliance with terms of the new OPEC+ deal, which prescribes a decline in the physical output volumes. In practical terms, this means that despite some recovery in the Urals spot price to the $20-25/bbl range in May, budget revenue undercollection in June may worsen.

The experience of March-April suggests that the Minfin's FX announcements provide only limited guidance as to what amount of FX the CBR will sell on the open market. If previously the CBR's FX interventions tightly correlated with the Minfin's operations, two major changes were introduced in March: Starting March 10 and responding to the sharp drop in the oil price below the $42.4/bbl cut-off price, the CBR abandoned the Minfin's backward-looking intervention guidance (based on last month's Urals price) and started front-running the interventions based on the current Urals price. Based on the CBR's daily intervention data and public statements by the CBR governor, we estimate such sales at $3.5bn from 10 March to 30 April, translating into daily interventions of $50mn per each $10 Urals price below the $42.4/bbl cut-off level.

Starting 19 March and responding to the drop in the Urals price below $25/bbl, the CBR initiated additional FX sales attributable to the handover of the CBR's 50% equity stake in Sberbank, Russia's largest lender, to the government. According to our estimates, in the period between 19 March and 30 April the CBR sold $3.6bn of FX attributable to the deal. This translates into average extra daily FX sales of $140mn per each $10 Urals price below the $25/bbl threshold.

It remains unclear whether the CBR will stop those additional interventions when the Urals price returns back above $25/bbl. The intensity of the sales in March-April has been volatile from day to day, pointing to the CBR's flexible approach to interventions depending on the current market situation. We believe the CBR has yet to sell around $24bn of FX attributable to the Sberbank deal, and the recently CBR macro forecasts imply that the regulator intends to channel the entire sum into the market within this year.

Based on this analysis (also illustrated in Figures 1 and 2 below) we expect CBR to sell up to $4.0bn in May where Urals in its current $20-25/bbl range. 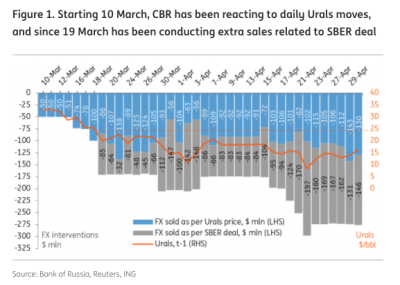 CBR may lower its presence on FX market once it stabilises

Looking beyond May, we expect the CBR to eventually scale back its presence on the FX market to the current requirements of the Minfin, ie, to re-align its FX interventions with the Minfin's monthly announcements. We base these expectations not only on the assumption the CBR remains committed to inflation targeting, ruble free-float and liberalised capital account, but also on the arithmetics of the CBR's previous FX purchasing and spending obligations.

On the one hand, indeed as of May, the CBR has around $24bn of FX to spend due to the Sberbank handover. In addition, that sum might be increased by another $4bn if the previous plans by the Minfin to invest an additional RUB300bn from the National Wealth Fund in 2020 (discussed last year) remain intact.

On the other hand, however, as of May, the CBR also has $22bn in the FX purchasing pipeline, comprising of a $19bn interventions backlog from August-December 2018 (initially the CBR suspended $31bn in FX purchases during that period, but later on caught up with $12bn), as well as $3bn in front-running FX selling in March-April this year (the CBR sold $2.5bn of FX due to Urals being below $42.4/bbl instead of buying $0.8bn as prescribed by the Minfin).

As a result, an eventual netting between the two counter-balancing items cannot be excluded. At the same time, we should note that it is not guaranteed, as the CBR has room for manoeuver in this regard. The initial deadline for the FX purchase backlog was 1 February, 2022, while the initial timeframe for Sberbank-related FX sales was originally indicated at 3-7 years. For now we assume that the CBR will publicly clarify its FX operations schedule once the market conditions allow it. 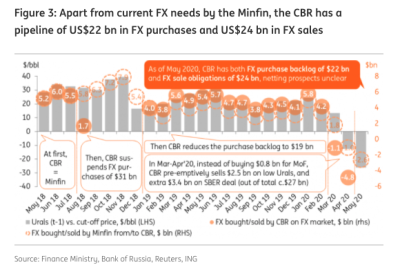 The CBR's active position on the FX market may raise the question whether it was instrumental in assuring the ruble's relative strength in the last couple of months.

The ruble depreciated only 10% to dollar in March-April, which is better than the 12% seen among the ruble's EM/commodity peers, and that has led to a decline in the ruble's country discount to peers from 10 percentage points to a new post-2014 low of 8 pp (see Figure 4).

While we do not exclude that the CBR's FX interventions indeed contributed to the ruble's performance, we also note that it was only one of several factors, with the overall balance of payments likely playing a major role: the Ruble's 'catching up' with peers has been a steady trend since at least mid-2018, reflecting active portfolio investor interest in the local bond market.

Finally, the narrower-than-expected fuel revenue undercollection for April may also point to a better-than-expected current account balance, as the physical export volumes may have remained stable, and the actual delivery prices have not yet reached low spot levels. We expect to see confirmation of a benign current and capital account in the April balance of payments statistics to be released on 14-15 May. Meanwhile since May, Russia is supposed to lower its fuel supply as per the OPEC+ deal, and the lagged effect of oil prices may also take effect.

Overall, it does not appear at this point that the CBR's active involvement in the FX market has resulted in a major deviation of the ruble exchange rate from the market reality, but rather supplemented it. This, combined with likely elevated interventions in May, lowers the risk of dollar-ruble depreciating to the 80-85 range in 2Q20 as per our initial expectations.

At the same time, a potential reduction in the CBR's support to the FX market after 2Q20 combined with the likely delayed effect of lower Urals and OPEC+ commitments on financial flows, and low visibility on the global market mood, also suggest limited scope for ruble appreciation from current levels. 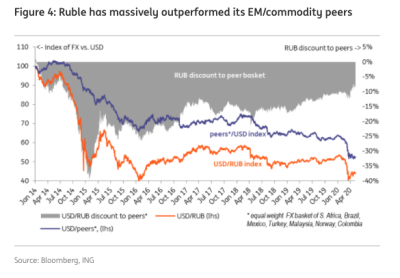 Dmitri Dolgin is the chief economist, Russia, at ING in Moscow. This note first appeared on ING’s “Think” portal here.