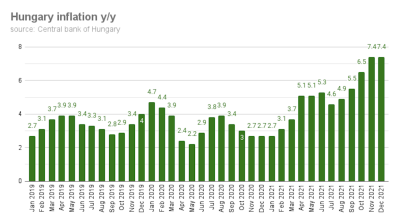 Consumer prices increased by 7.4% y/y in December, rising at the same pace as in November, the Central Statistics Office (KSH) announced on January 14. Analysts expected a slow deceleration from the 14-year peak in the previous month, helped by the government freeze of fuel prices in mid-November.

Core prices surged to a 20-year-high, reflecting strong underlying inflationary pressures that have triggered an aggressive rate hike by the National Bank.

Consumer prices have accelerated from 4.9% in August due largely to external factors but also to repricing after the service sector opened in late May. The pace of price hikes accelerated from the fall due to the jump in energy prices, pushing up the cost for industrial producers and agriculture. Factory gate prices hit a 24-year high in November at 21.6%

Analysts noted that inflation remained broad-based in November. Higher cigarette and vehicle fuel prices were the main drivers, but food and consumer durable prices also rose at a higher pace than the average, the KSH said.

Alcohol and tobacco prices increased by 8.9% y/y and food prices by 8%. Consumer durable prices were up 7.5% and the price of services increased by 5%, up 1pp and 0.4pp on a monthly basis respectively.

Core inflation excluding indirect tax effects, monitored closely by the MNB as a better indicator of inflationary trends, rose to 6.4% in December from 5.3% in the previous month. For the full year, the indicator averaged 3.9%, the MNB said.

The December figure shows an increasing likelihood that inflation will rise even higher in January, when the price cap on food will not yet enter into force, said senior analyst of ING Bank Peter Virovacz. The measure will reduce inflation by roughly 0.1-0.2pp.

In light of the latest data, the National Bank is expected to continue its monetary tightening cycle. The effective interest rate, or the one-week deposit rate, may rise to 4.75% in H1, according to ING Bank.

The price cap on staples will have little impact on inflation as the seven product categories only account for a 3% weight in the KSH inflation basket, according to economists.

Erste Bank signalled that runaway energy prices could feed into other prices in the coming months. The bank sees the return to the MNB's 3% target only in 2023.

Analysts warned that the government's expansive fiscal policy also presents an upside risk to inflation targets due to the significant wage increases and the pick-up in demand due to the higher income and other transfers before the elections.