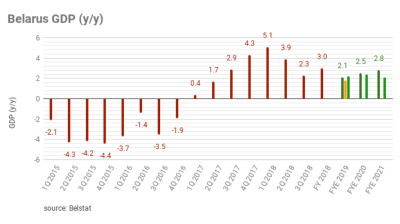 The International Monetary Fund (IMF) has revised downward its forecasts for the economic growth in Belarus in 2019 from 3.1% year-on-year to 1.8% y/y
By bne IntelliNews April 10, 2019

The International Monetary Fund (IMF) has revised downward its forecasts for the economic growth in Belarus in 2019 from 3.1% year-on-year to 1.8% y/y, according to the multinational lender's World Economic Outlook published on April 9.

In January, the IMF said that Belarus faces a new economic crisis if Minsk fails to secure full compensation from Russia and told Minsk it had better prepare a “plan B” in case there was no money forthcoming.

According to the IMF, medium-term growth in Belarus is projected at 2%, limiting convergence towards the income levels of richer neighbouring countries, according to the multinational lender. However, this modest outlook is "conditional" on full compensation from Russia.

"Should compensation be significantly less than full - and this is the key risk hovering over the Belarusian economy at this stage - medium-term growth could be materially lower than 2%, and the budget and current account deficits higher than projected above," the IMF said in its statement.

Russia’s tax manoeuvre in the oil industry envisages a gradual reduction in the rate of export duty on oil and petroleum products from 30% to zero in the period from 2019 to 2024 and a proportionate increase in mineral extraction tax on oil production.

COMMENT: Belarusian establishment remains monolithic. or does it?
Belarus' President Alexander Lukashenko warns of a “bath-house” in which “everybody” will suffer – as far away as Vladivostok
Belarusian authorities to hold concerts in Minsk park to prevent more opposition rallies