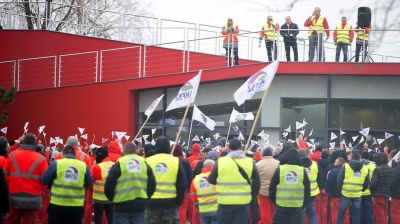 The week-long strike at Audi in January had little impact on GDP growth.
By bne IntelliNews May 16, 2019

Hungary's first-quarter GDP growth accelerated from 4.9% in 4Q18 to 5.3% y/y in the first three months of 2019, above the 5.1% consensus, the Central Statistics Office (KSH) said in a preliminary reading on May 15. The adjusted figure was 5.2%. On a quarterly basis, the economy expanded by an impressive 1.5%

Hungary's growth both on an annualised and quarterly basis was the highest among EU members that have released their GDP data so far. Eurozone and EU members grew by an annualised 1.2% and 1.9% and 0.4% and 0.5% from Q4 respectively.

Although detailed data will only be published on May 31, market-based services, the construction sector, and industry contributed the most to growth in Q1, the KSH said.

Economic data in the first three months foreshadowed excellent figures for Q1. The construction sector and industry grew 48% and 6.2% respectively, while retail sales expanded 6.5% during the period.

Hungary's construction output is driven by EU-funded projects, complemented by the housing boom and investments by manufacturers. In the industrial sector, new capacities have lifted vehicle production, a strategic sector of the industry.

The sector was unfazed by a slowdown in eurozone economies. High employment and robust wake hikes are lending support to growth in market services.

Hungary last recorded such strong growth in the first three months of 2000, but at that time external debt was growing, Finance Minister Mihaly Varga commented on the data.

Growth was fuelled by an increase in investments, exports, jobs and wages, he added.

Hungary's updated Convergence Programme put GDP growth in 2019 at 4% and forecasts similar growth in the coming years. The government currently expects GDP to grow by 4.1% in 2019 and 2020, Varga said.

ING Bank expects GDP growth to decelerate in the coming months. The slowdown in the coming quarters is expected to arise from the unfavourable external environment, such as the weak eurozone economies, the trade war and uncertainty around Brexit, according to the forecast. Prevalent capacity constraints, labour shortages and a higher base from last year could also prevent the economy from maintaining its current pace of growth. ING's full-year forecast is 4.3%

Takarekbank said double-digit wage growth and the home subsidy scheme would keep the main engine of growth, domestic demand, at an elevated level. The investment boom is set to continue on the office and commercial property market, while new home completion is set to peak this year with beneficial secondary effects.

Russia's services PMI bounces back to 35.9 in May from a record low of 12.9% in April, but business still contracting
3 hours ago
Easing of lockdowns offers hope to emerging Europe’s COVID-struck economies
23 hours ago
Kazakh manufacturing ekes out PMI expansion in May
1 day ago
A third of Russians are ready to participate in a mass protest against falling living standards
1 day ago
Romanian banks post 9% y/y smaller profit in Q1
1 day ago