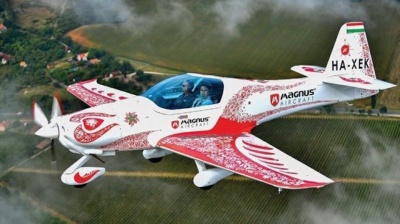 Hungary's Magnus Aircraft will complete construction of a 5,000 sqm composite parts plant by the end of summer to boost production of its flagship composite sports aircraft, the company announced on April 18. The company's production base is in southern Hungary near the Pecs-Pogany airport.

The company began production in October at its base from a HUF3bn (€9.3mn) investment. The government provided HUF2bn in grant for the entire project, worth HUF5.2bn.

It employs about 50 people at present, but headcount will climb to 120 when the new parts plant is completed.

Magnus Aircraft, established in 2011, specialises in the design of small sport and training aircraft. It was the first company in the world to develop a two-seat aircraft made from composite materials in 2015 with cooperation from Siemens, which has developed a fully electric drive system. The lithium-ion batteries are stored in the front of the plane below the cockpits.

The all-electric Magnus eFusion made its maiden flight three years ago and the plane remains the company's flagship product. The aircraft's low-wing symmetrical wing profile providing superb aerobatic capabilities make it a great choice for the training of pilots, analysts said.

As part of its growth strategy, the company is working on building a dealer network to gain a larger presence in the international market.

Since October, Magnus has built seven planes, but it plans to ramp up production to 200 a year, said CEO Laszlo Boros. The company has also developed an aircraft fuelled by kerosene made of composite materials. Magnus' net revenues rose from HUF150mn in 2017 to HUF300mn.