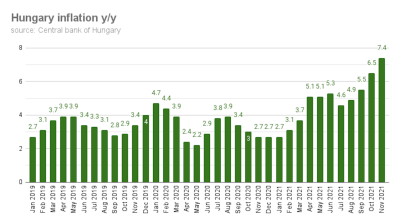 Consumer prices in Hungary rose 7.4% y/y in November, the highest in 14 years after reaching 6.5% in October, according to the Central Statistics Office (KSH) data. Widespread price pressure suggests that inflation is set to remain elevated in the coming months, according to analysts.

The growth in prices was broad-based, with more than 90% of 140 products in the consumer basked tracked by KSH showed annualised price increases.

Prices in the category of goods that includes vehicle fuel climbed 15.1% as vehicle fuel prices jumped 37.7% y/y. The HUF480/litre cap on retail fuel prices from the middle of the month had little impact on the November data, as KSH tracks data until the 20th of each month.

In a separate report, the National Bank said the rise in inflation in November was "reflected in a wide range of goods and services". Fuel prices contributed 2.4pp to the headline data.

Core inflation excluding indirect tax effects – a bellwether indicator of underlying inflation – rose by 0.6% m/m to 5.3% to the highest level in 13 years.

The MNB said the indicators measuring households' inflation expectations "showed unusually high volatility" and rose from the previous month. It added that their value is above the central bank's tolerance band.

Analysts see the prospect of a slowdown in the coming months as unlikely given the supply constraints in the industry, the rise in energy prices and the government’s expansionary fiscal policy ahead of the spring elections.

The weak currency and rising wages triggered by the tight labour market and the government’s giveaway, including a HUF600bn (€1.64bn) tax rebate for families also represent significant upside risks in the short term.

The Hungarian central bank is ready for a long tightening cycle to bring inflation down, according to central bank governor Barnabas Virag. His comments came a few days after MNB governor Gyorgy Matolcsy revised the MNB’s 2022 inflation target to 4.7-5.1% latest, well over the present guidance of 3.4-3.8%. Matolcsy warned of the risks of long-term inflation pressures if fiscal stimulus continues.

ING Bank expects the central bank to continue the rate hike cycle with the base rate rising to 4.25% in the first half of 2022. The MNB raised the base rate in six steps from 0.6% in June to 2.1% last month and raised the one-week repo by 250bp in the same period.

At the end of July, 240,706 Czechs were seeking employment. This figure is 9,397 more people than the previous month, translating into a rise of 0.2%.