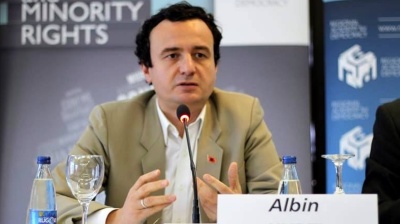 Human Rights Watch’s executive director Kenneth Roth has condemned the US administration for arranging the ousting of Kosovo’s Prime Minister Albin Kurti, and for favouring President Hashim Thaci in an attempt to reach a land swap deal with Serbia.

Kurti's government collapsed after losing a no-confidence vote on March 25, with the motion launched by its coalition partner, the Democratic League of Kosovo (LDK), due to their huge disagreements, less than two months after it came to power.

“In its eagerness to back someone who would cut a peace deal with Serbia, the Trump administration backs the ouster of Kosovo PM Albin Kurti whom many thought was "their only chance to rid the country of the corrupt leaders and warlords of the past,” Roth said in a tweet on April 5.

Roth referred to an article published by The Economist on April 2 titled “Did America help oust Kosovo’s reformist government?”

According to The Economist article, Kurti was ousted under the US pressure as he was seen as an obstacle to a potential agreement between Kosovo and Serbia which the Trump administration could use as a foreign policy success in the run-up to the US presidential election later this year.

"Donald Trump’s administration wanted the truculent prime minister out of the way in order to claim peace in Kosovo as a (rare) foreign-policy success in the run-up to America’s presidential election. Its friends have provided," the article said.

Kurti is opposed to the idea of land swap with Serbia, a plan supported by Thaci and his Serbian peer Aleksandar Vucic.

The idea of ‘border corrections’ was proposed by Vucic in 2018 and was positively accepted by Thaci, who suggested that southern Serbian municipalities with a large ethnic Albanian population should become part of Kosovo.

Such a deal would most probably see the exchange of the majority Serb municipalities of northern Kosovo exchanged for the majority Albanian Presevo valley in Serbia.

However, it would face strong opposition both within the two countries and among many of the international community, who fear that a land swap between Serbia and Kosovo could inspire demands for borders to be redrawn elsewhere in the Western Balkans.

The World Bank has helped Kosovo to provide new medical equipment to deal with the coronavirus (COVID-19) crisis with a €1.75mn grant, the bank said. The procurement will reinforce ... more

The US power generation company ContourGlobal is seeking to resolve the dispute with Kosovo over a failed thermal power plant project through arbitration, the economy ministry in ... more