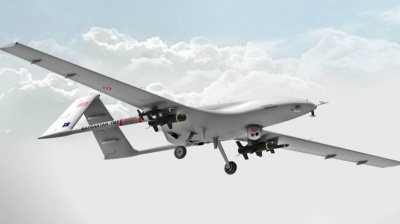 Since its independence in 1991, Ukraine has been largely limited in its capability to defend itself, partly through poor decisions made by Ukraine and partly due to limits placed on Kyiv by its Western partners. However, Ukraine's acquisition of the Turkish Bayraktar TB2 armed drones, so successful in conflicts in Syria, Libya and, most recently, in Armenia, substantially changes Ukraine's ability to defend itself in its conflict with the Russian Federation.

The other significant development with military implications for Ukraine is Turkey's commencement of construction of a canal that runs parallel to the Bosporus, allowing for much larger ships to transit to and from the Black Sea and the Mediterranean. As reported in yesterday's Ukraine Business news (https://ubn.news/), Turkey expects construction will take six years. In addition, Turkey announced that it would not apply restrictions on the size and number of combatants from non-Black Sea countries transiting to and from the Black Sea. The canal's ability to accommodate large ships will be similar to the capacity of the Suez Canal.

Drones – Indications are that Turkey is providing Ukraine with the TB2 drones without conditions, likely meaning that Turkey is placing no restrictions on Ukraine's use of the TB2s. If true, this is the first time since the beginning of the conflict with Russia that Ukraine has independent control of a primary weapons system, one that has proved effective against both Russian armour and anti-aircraft radar systems in both Armenia and Syria.

The United States imposes restrictions on the deployment and use of lethal defensive weapons it has supplied to Ukraine. For example, there are restrictions on the deployment of the Javelin anti-tank missile. In addition, the United States has reportedly placed limitations on counter-battery radar that it has provided to Ukraine, including limits on Ukraine obtaining firing solutions against artillery fired at Ukrainian troops from Russian territory.

Ukraine is not only purchasing TB2 drones. Turkey and Ukraine have reportedly signed an agreement whereby Ukraine will supply propulsion systems for advanced versions of the TB2. In addition, Ukraine may also be producing its version of the TB2, under licence from Turkey.

In its recent war with Armenia over the Armenian enclave of Nagorno-Karabakh, Azerbaijan used the TB2 to destroy Armenian armour, all supplied by Russia, and neutralised the Russian Pantsir S-1 air defence system. Azerbaijan is not the first regional power that has used a new weapon to such significant effect against a supposedly superior foe.

On October 21, 1967, during the Six Day War with Israel, two Egyptian PT boats anchored in the harbour of Port Said fired four Soviet-made Styx missiles, sinking the Israeli destroyer Eliat. Before this date, cruise missiles had never been fired in combat.

This event caught the attention of the US Navy. At the time, the US Navy had no defence against cruise missiles. Anti-aircraft guns had been removed from aircraft carriers to make space for more aircraft. In addition, most US Navy ships carried electronic warfare systems that were ineffective against the Styx missile, because the missile used radar from its target as a homing device. The Azeris use of Turkish drones, and how Azeris deployed their drones, may be a "Styx Moment".

Since independence in 1991, Ukraine has never really been in complete control of its security. However, with the acquisition of the Turkish drones and the development of Ukraine's own weapons system, such as the Neptune anti-ship missile with an effective range of 300 km, Ukraine will achieve improved mastery over its own defence.

In the early 1990s, Ukraine was under intense pressure from the West to give up the nuclear weapons arsenal inherited from the Soviet Union. As a result, in 1994, Ukraine and Russia, Great Britain and the United States signed the Budapest Memorandum. Ukraine agreed to give up its nuclear arsenal in return for "assurances" from the other three signatories of its territorial integrity.

In the late 1990s, Ukraine became an arms exporter, partly through the arms industry inherited from the Soviet Union and partly by liquidating its stock of operational weapons. Included was the sale, in 2003, of an S300 air defence system to Saddam Hussein's Iraq. The sale took place while the United States and its allies were maintaining a no-fly zone over Iraqi Kurdistan. The liquidation of Ukraine’s armed forces continued up until February 2014, during the time that Yanukovich was still president of the country, when Ukraine sold three MiG 29 fighter planes to the Republic of Chad.

In the late winter and spring of 2014, during Russia's invasion of Donbas and Crimea, Ukraine received minimal military support from the West. At the time, Ukraine's security services were riddled with agents from the FSB, Russia's security service.  For this reason, the United States and Nato were reluctant to provide Ukraine with actionable intelligence from assets that included AWACS planes, navy ships equipped with the AEGIS air defence system, and spy satellites capable of delivering real-time video coverage. The United States was concerned about revealing sources and methods.

Between February and September 2014, Ukraine, mainly on its own, transformed its armed forces from approximately 6,000 combat-ready soldiers to nearly re-taking all of Donbas. Since then, Ukraine has stopped further Russian advances. At the time, Ukraine was relying on drones that took 40 minutes to obtain a firing solution, versus 2 minutes for similar Russian drones.

Since 2018, when Ukraine first obtained Javelin anti-tank missiles and counter-battery radar from the United States, restrictions have applied to the deployment, capabilities and use of these weapons. Ukraine's acquisition of Turkish drones, apparently without limitations on their use, changes the equation. As Azerbaijan showed with its use of the TB2s in Armenia, Ukraine can use its TB2s to obtain firing solutions against artillery and rocket emplacements, and also launch ground attacks against armour and air defence systems.

Robert Homans is an International Financial Sector Consultant based in Washington DC, and tweets at @rhomansjr