Half of Slovakians tested for coronavirus in one day, 1% positive 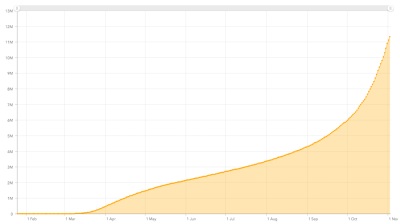 Slovakia tested almost 50% (2.58mn) of its citizens on the first day of the countrywide testing for coronavirus (COVID-19) under the remit of the military on October 31. A total of 25.850 people (1%) tested positive, confirmed Defence Minister Jaroslav Nad.

According to Health Minister Marek Krajci, the mass testing will flatten the curve of new infections. "This is something that will make Slovakia enter the annals of history. The people went out to resist the pandemic," said Krajci, quoted by the Slovak News Agency.

On November 1 the PM said repeated mass testing for coronavirus will certainly take place, most likely except for a few relatively unaffected districts. The Central Crisis Management Team will decide on this on November 2.

The PM also confirmed that all measures, including mandatory facemasks, will remain in place even after the mass testing is completed.

Slovak President Zuzana Caputova Caputova expressed reservations concerning the mass testing earlier on October 30, telling Matovic that preparation was insufficient. Later on Sunday, however, she praised all who took part in organising the testing, saying she was happy to see that her concerns haven't come true.

"We've seen that local and town communities are able to do a lot and sustain even such a big project," said Caputova, cited by the news agency.

"It's become evident again that despite differing views and objections, we're able to unite as a community," she said.

FDI inflows to CEE down 58% in 1H20 but rebound expected

OUTLOOK 2021 Slovakia
BRICKS & MORTAR: Rosier future beckons for CEE retailers after year of change and disruption
FDI inflows to CEE down 58% in 1H20 but rebound expected