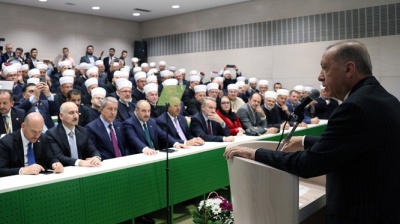 Erdogan while visiting an Islamic community centre in Bosnia and Herzegovina this week. / bne IntelliNews
By bne IntelIiNews September 8, 2022

Turkish President Recep Tayyip Erdogan’s veiled threats of military action against Greece—made this week during a visit to the Bosnian capital Sarajevo—have been brushed off by some analysts as the nationalist rhetoric of a strongman who knows he’s in big trouble in the opinion polls ahead of elections. On the other hand, there are those who worry how far a desperate Erdogan might go to cling on to power, not least the Greeks whom the Turkish leader on September 6 unsettled with the chilling threat that Turkey could "come all of a sudden one night".

"What I'm talking about is not a dream," Erdogan also remarked at a press conference in Sarajevo. "If what I said was that we could come one night all of a sudden [it means] that, when the time comes, we can come suddenly one night."

With Turks mired in a wretched economic crisis—official inflation of 80% and a collapsed Turkish lira are two of the ills critics of Erdogan say are a direct result of his economic mismanagement—rather than talk about the economy, their president would perhaps much rather whip up longrunning disputes with fellow Nato member Greece over the sovereignty of various Aegean islands, maritime natural gas drilling rights and airspace boundaries.

The comments, plus provocations such as the Turkish defence minister being flown over the Aegean in a fighter jet, are difficult for Athens to take lightly. While refraining from responding with invective itself, the Greek government has, however, sent letters to Nato, the European Union and the United Nations protesting at what it described as Erdogan's "openly threatening" and "inflammatory" statements.

The letters said the organisations must condemn the statements from Erdogan that "imbue the Turkish people with hatred, enmity and contempt towards their Greek neighbors".

"By underestimating the seriousness of the matter, we risk witnessing again a situation similar to that currently unfolding in some other part of our continent," the letters added, in reference to the war in Ukraine.

"We have a vertical escalation here, and a dangerous incident could occur at anytime," Zachariah Micha, director of studies at the Institute for Security and Defence Analysis in Athens, told Middle East Eye on September 7.

"Turkey has a history of announcing what it is going to do, as it did with invasions in Syria. Erdogan may be preparing the international audience for something that is going to happen."

Soner Cagaptay, a senior fellow and director of the Turkish Research Program at the Washington Institute, took a different view of Erdogan's comments, writing on Twitter: "Suggesting that Greek islands are “occupied by Greece”, Erdogan is betting he’ll win the war of words with Athens - can’t imagine a Greek PM claim Istanbul is occupied. All Erdogan needs in an election year is for Greece to look meek."

This year marks the 100th anniversary of the Greek-Turkish war of 1919-1922, On August 30, Turkey celebrated Victory Day, marking the liberation of Anatolia from Greek forces.