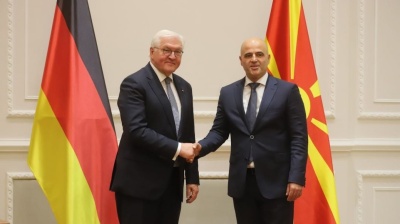 German President Frank-Walter Steinmeier said on November 29 in Skopje that Germany wants to see North Macedonia in the European Union as soon as possible and he urged MPs to adopt the constitutional changes rejected by the opposition as a crucial step toward the EU integration process.

Steinmeier arrived in Skopje for a two-day visit to support the EU integration process of the country. During the first day of the visit, the German president met his peer Stevo Pendarovski, PM Dimitar Kovacevski and other officials.

In July 2022, North Macedonia accepted a bilateral protocol with Bulgaria, which opened the way to start the long-awaited EU accession talks. Before that Sofia vetoed the start of North Macedonia's EU accession process due to language, cultural and history issues. However, the country needs to make constitutional changes and include ethnic Bulgarians, which make up less than 0.2% of the total population, in the constitution as a pre-condition for the second intergovernmental conference. The opposition is against these changes.

“I am aware that the path to EU membership is anything but easy, that trust and patience are strained in arduous negotiations, sometimes perhaps strained too far," Steinmeier said in his address to the parliament, urging MPs and the people to continue resolutely on the path towards EU accession.

He underlined that the constitutional amendment is about more than point-scoring in domestic political debates.

“Now is not the time to lapse into simplistic slogans and nationalistic sentiments. Do not lose sight of the goal that you have pursued for so long, of the EU accession that you have sought for seventeen years now,” the president said, according to the statement released by his office.

“I am certain that the path to Europe is worth even the next, challenging step!” he said.

Steinmeier also noted that determination to implement reforms is crucial to preserve democracy and European values.

Germany is the largest economic partner of North Macedonia, with about 45% of its total exports destined for Germany.

Following the visit to Skopje, Steinmeier will pay a visit to Albania, which also started EU accession talks in July.

VISEGRAD BLOG: When Eastern European states speak out they are now listened to
North Macedonia’s president says Russian secret services are behind rift with Bulgaria
EBRD invests record €13.1bn into its region in 2022