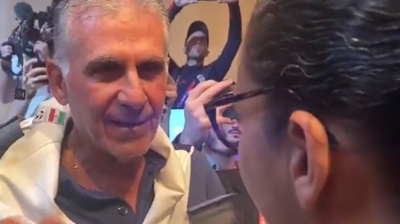 Queiroz makes his point on asking other coaches about political matters to the BBC reporter. / social media, screenshot.
By bne IntelIiNews November 25, 2022

Frustrating as it might be for those who don’t like the mixing of sport with politics, “Why don’t you ask Southgate about Afghanistan?” threatens to become one of the most memorable lines of the 2022 Fifa World Cup football finals under way in Qatar.

Clearly dismayed that politics was again dominating the questions posed by journalists at a pre-match press conference—Iran today (Friday November 25) take on Wales from 10:00 GMT—Iran’s coach, Carlos Queiroz, suggested his fellow coaches, such as England’s Gareth Southgate, should also face political questions. Taking a BBC journalist to task before being shepherded out of the press briefing room, Queiroz said: “Why don’t you ask the other coaches? Why don’t you ask Southgate: ‘What do you think about England and the United States that left Afghanistan and all the women alone?’”

Inevitably, when the Iranian team line up prior to the Wales game, those in the stadium and TV viewers will be eager to see whether the players decline to sing the Iranian national anthem, just as they did before their first match at the finals against England on November 21.

The silence of the players was taken as a show of solidarity with protesters in Iran who for more than two months have been keeping up anti-regime demonstrations.

Queiroz bristled as the BBC reporter asked Iran striker Mehdi Taremi whether he had a message for the protesters. Taremi responded that the Iran squad were under no pressure to sing the anthem, later adding: “I cannot change anything, thousands of other people like me cannot change anything.”

The Iranian players faced pressure before the tournament began with complaints from some quarters that they were not doing enough to show their sympathy with the protesters, more than 400 of whom, including scores of children, have been killed during the unrest in clashes with security forces, according to human rights groups. They now find themselves under pressure with some reports indicating that they could face reprisals from the regime once back home if they keep up their anthem silence. Other reports have speculated that they are being stalked by watchful Iranian secret agents sent to Qatar.

The pressure intensified further on November 24 with the news that Iranian security forces have arrested one of the country’s most famous footballers, Voria Ghafouri, a former member of the national football team and once a captain of the big Tehran club Esteghlal. Ghafouri during the unrest has been very outspoken on social media, telling the government to stop killing Kurdish people. Some observers took the arrest of Ghafouri as officials serving a warning to the World Cup team to not continue with their protests.

Back in the purely political arena, the UN Human Rights Council on November 24 voted to set up a fact-finding mission to investigate the deadly crackdown on the anti-government protests. Tehran greeted the news of the mission by saying it was an arrogant political ploy. UN human rights chief Volker Turk warned that Iran was in a "full-fledged" crisis.

The standoff over the regime’s response to the protests, which the UN has warned could get increasingly bloody, has led some Iran watchers to conclude that the Islamic Republic's relations with Europe—traditionally significantly better than those with the US—are cratering and that any hopes for a return to the 2015 nuclear deal, or JCPOA, are withering.