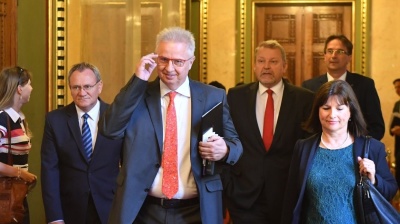 The Committee on Legal Affairs (JURI) of the European Parliament has blocked the nomination of the Hungarian and Romanian candidates for posts in the next European Commission.

This is the first time that the European Parliament has rejected commissioner candidates nominated by the European Commission president-elect.

Hungarian MEP Laszlo Trocsanyi, put forward for the neighbourhood and enlargement portfolio, and Romania's Rovana Plumb, nominated for the transport portfolio, were the only two commissioners-designates asked by MEPs to clarify their financial statements in person.

Trocsanyi, a former justice minister in Viktor Orban's government, was blocked on September 26, with the committee citing conflict of interest. Eleven members voted against and nine supported his nomination.

The JURI established a conflict of interest for the Hungarian nominee concerning state orders awarded to Trocsanyi's law firm. The former constitutional judge said he withdrew his share in the firm and said the company declined all government work during his tenure as justice minister.

MEP Plumb also fails to meet the requirements because of “a conflict of interests”, according to unofficial sources quoted by Hotnews.ro, thereby blocking her appointment.

"Without the opinion of the Legal Commission, the hearing of the Transport Commission cannot take place,” Romanian MEP Siegried Mureșan, a member of the National Liberal Party and therefore a political rival of Plumb, stated.

In Hungary, the opposition Momentum party announced on social media that it was evident that Trocsanyi had lied to the committee when he said he had no assets in his law firm in the last ten years.

The former justice minister said a political decision was made and he would take the necessary legal steps.

The JURI's vote means that neither Plumb nor Trocsanyi can proceed to the next phase of hearings at the European Parliament.

European Commission spokeswoman Mina Andreeva said the decision does not mean that these two countries have to propose new candidates. The next steps would depend on how the European Parliament chooses to proceed, in coordination with European Commission president elect Ursula von der Leyen, she said.

Hungary’s ruling Fidesz reacted angrily to the decision, calling it a witch hunt and the revenge of pro-migration forces, a communication slogan often used recently by the rightist party.

Leftists are attacking Trocsanyi because of his approval of rules restricting migration, he added. The European Parliament’s pro-migration members “cannot tolerate” having a new member in the commission who was minister of justice when Hungary closed its borders to migrants.

The decision by MEPs to block Trocsanyi's candidacy is a blow to Hungarian Prime Minister Orban, who pushed Trocsanyi even though as justice minister he oversaw several legal bills challenged by the European Commission for breaking EU rules.

Von der Leyen's announcement that Hungary's candidate would be responsible for neighbourhood and enlargement in the new commission came as surprise as local political analysts expected him to get a less important post, such as humanitarian aid and crisis management, or international cooperation and development.

Local media reported that Orban has lobbied successfully, as had top officials from other V4 countries, which secured other important commissioner positions.

Fidesz MEP Eniko Gyori, a former state secretary for European Affairs, could be a possible replacement for Trocsanyi. Livia Jaroka, who is the first Roma MEP, was also mentioned as Orban's potential plan B nominee by local media.