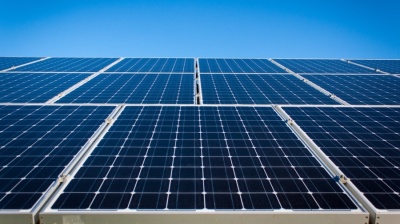 Advancing technology in the battery field will make it possible to integrate renewables energy sources such as wind and solar into the grid on a large scale.
By Clare Nuttall in Glasgow September 22, 2020

Europe and other world regions are lagging behind East Asia in innovation in electric battery technology, a new report from the European Patent Office (EPO) and the International Energy Agency (IEA) shows. However, for the next generation of batteries based on novel cathode chemistries, the field is much more open, EPO chief economist Yann Meniere said in an interview with bne IntelliNews.

The importance of advancing technology in the battery field can hardly be overestimated: it is central to the roll-out of electric vehicles (EVs) as well as for the transition to the green economy, as it makes it possible to integrate renewables energy sources such as wind and solar into the grid on a large scale.

“Electricity storage technology is critical when it comes to meeting the demand for electric mobility and achieving the shift towards renewable energy that is needed if we are to mitigate climate change,” said EPO president Antonio Campinos, according to a press release marking the launch of the report.

The IEA forecasts that almost 10,000 GWh of batteries and other forms of energy storage will be needed worldwide by 2040, a 50-fold increase. “IEA projections make it clear that energy storage will need to grow exponentially in the coming decades to enable the world to meet international climate and sustainable energy goals. Accelerated innovation will be essential for achieving that growth,” said IEA executive director Fatih Birol. 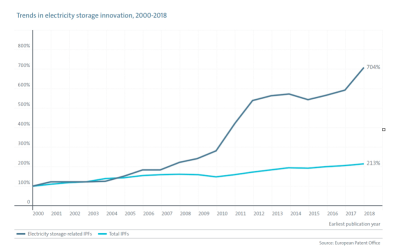 The first wave of development was focused on consumer electronics such as smartphones and computers. By 2011, consumer electronics was overtaken by electric vehicles (EVs) as the biggest growth driver for Li-ion battery-related innovation. Today, “electric mobility in particular is fostering the development of new lithium-ion chemistries aimed at improving power output, durability, charge/discharge speed and recyclability,” says the report.

We are now on the cusp of a third wave, batteries for energy storage to integrate renewable energy such as wind and solar power into electricity networks.

“If we are to make a success of the green transition this will be as big as EVs and much bigger than consumer electronics,” said Meniere. How strong the wave will be depends on policy; the Green Deal in Europe, for example, is set to be an accelerator for the new wave of technologies.

Central Europe has become a hub for battery production for EVs, helped by the presence of major automakers in Central Europe and Germany. Four South Korean e-car battery makers have chosen Hungary for their production sites, as European car manufacturers prepare to expand or replace their existing models with new fully electric or hybrid models. Across the border in Poland, LG Chem is building a lithium-ion cells and batteries factory for electric cars in Wroclaw.

In addition to the East Asian giants, there have been some investments in the region by European battery producers; Germany’s Draxlmaier plans to build the first battery factory for electric cars in Romania and Belgian tech corp Umicore is building a factory for battery components factory in Poland. There is also local champion InoBat Auto that plans to build a battery factory in Slovakia, thereby reducing European EV manufacturers’ dependence on Asia.

Overall, however, patent applications from Central Europe are low, in line with the general trend for Europe as a whole, with the exception of Germany and to some extent France.

East Asian companies, particularly those from Japan and South Korea, have a “clear lead”, according to the report, accounting for nine of the top ten global applicants for patents related to batteries, and for two-thirds of the top 25. Innovation in battery technology is mainly concentrated in a small group of very large companies; however, says the report, smaller companies, universities and public research organisations also play a significant role in the US and Europe. In Europe, SMEs account for 15.9% and universities/research organisations for 12.7% of IPFs filed. 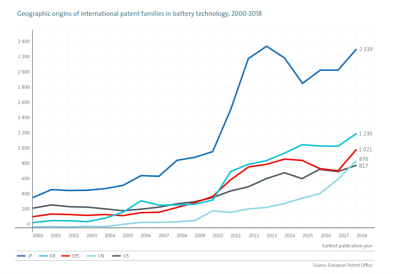 According to Meniere, the big East Asian manufacturers drew ahead during the earlier wave of innovation focused on consumer electronics, which allowed them to “ride the wave” as the emphasis shifted to batteries for EVs. East Asian manufacturers “started with consumer electronics and used that position to consolidate with respect to EVs. Now they have a very strong lead thanks to that.” While companies in the automotive sector in Europe and the US have now started to innovate with batteries, so far this has not been enough for them to catch up with their East Asian peers.

However, for the next generation of lithium ion technology, such as LFP (lithium ferrophosphate) or NCA (lithium nickel cobalt aluminium oxide), “competition is more open,” said Meniere. “There are more or less equivalent market shares for different parts of the world. Innovation is mainly concentrated in universities and startups, and these are performing well in Europe, though it will be a challenge to industrialise and bring to market.” 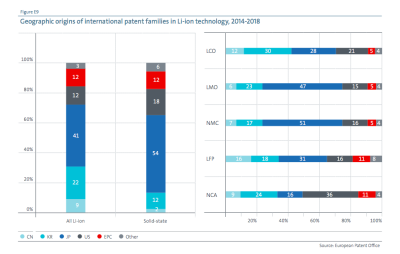 As the report says, “The share of inventions from European countries is relatively modest in all fields, but is twice as high in the emerging fields compared with the more established ones; it generated 11% of IPFs in both LFP and NCA.”

However, it adds, it was a similar story in the early days of LCO (lithium cobalt oxide) and LMO (lithium manganese oxide) cathodes, when universities “led the way, before large corporations, mostly in Japan, took over the development of the batteries as they started to be integrated into consumer products like camcorders in the early 1990s”.

The challenge therefore for European policy-makers is to organise a smooth transfer of technology from universities to industry and mass production, something that, according to Meniere, has been missing so far.

Since Russia’s Yandex called off a deal to acquire online bank Tinkoff, the standout IPO of Kazakhstan’s financial technology and e-commerce leader has become the benchmark-setter.

The Economics affairs ministry wants to phase out the sale of anonymous prepaid mobile SIM cards citing their widespread use for criminal activities using "burner" phones.