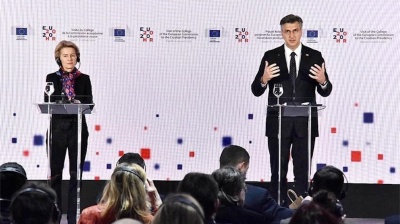 The two Western Balkan countries received a crushing blow in October 2019, when French President Emmanuel Macron vetoed the start of accession negotiations and talked of the need to make changes to the accession process — words that caused consternation not just in the two countries immediately concerned but across all the accession candidates of the Western Balkan region.

This raised fears of an imminent backsliding in the reform process, if countries from the region could no longer count on closer integration with the EU as a reward for reforms in areas such as rule of law, democracy and fighting corruption.

The government in Skopje took the radical step of changing the country’s name to “North Macedonia”, thereby resolving a decades-long dispute with EU member Greece that had previously prevented it from progressing towards membership. In Albania, the government has pursued politically difficult judicial reforms as well as clamping down on cannabis cultivation.

Despite meeting the criteria to start accession talks, officials from the two countries came away from the October EU summit without a date to start such discussions, which has already led to the resignation of North Macedonia’s prime minister Zoran Zaev and his cabinet’s replacement with an interim government pending early elections this spring.

Speaking as the EU’s newest member, Croatia — a staunch advocate of enlargement in the region — takes over the EU Council presidency for the first time, von der Leyen said she would propose changes soon, and stressed that Brussels must deliver on its promises to the two candidate countries.

“We will be working on the methodology and put forward for the enlargement process the proposal for the methodology early this year just to reflect how we can improve the accession process,” said von der Leyen.

“But I am deeply convinced that this should not keep us from taking on the accession talks with North Macedonia and Albania. We asked them to do a lot, they fulfilled the criteria, so now we do have to deliver and to keep our promises.”

“[T]he next months will of course be particularly crucial for our relationship with the Balkans … We know that we can count on Croatia and that we have a very strong supporter on our side!” she added.

The new President of the European Council Charles Michel said on January 9 that both he and Croatian Prime Minister Andrej Plenkovic would be "together very committed to develop a stronger political preparation in order to be able to make the clarity and to give, I hope, a clear signal. It means [that I hope] it will be possible to make progress on the modernisation of the enlargement process and to see how is it possible to give the clarity for the different countries."

Plenkovic met Macron on January 7, saying that the meeting had been “extremely useful”, a Croatian government statement said.

Commenting on the enlargement process, Plenkovic said that he and Macron had discussed a change of methodology.

“The European Commission is expected to propose changes to the accession process already this month and release an additional report on North Macedonia and Albania in February,” said the government statement.

"We want such an atmosphere to be created before the Zagreb summit that the countries that had reservations could agree to continuing the enlargement process. That was the gist of our discussion on this topic," Plenkovic said.

A report by think-tank the European Council on Foreign Relations (ECFR) warns of the importance of the prospect of EU membership in encouraging countries from the Western Balkans — divided by war in the 1990s — to settle their differences.

This was highlighted in recent weeks by the dispute between Serbia and Montenegro — the two frontrunners in the accession process — over the controversial new church law adopted in Montenegro. The law led to mass protests and punch-ups in both countries’ parliaments.

“Should the EU’s influence wane, nationalist leaders will exacerbate tensions with neighbouring countries. The future of North Macedonia’s Prespa Agreement with Greece is under threat, and the Serbian Orthodox Church in Kosovo and Montenegro could also prove a potential flashpoint,” said Beata Huszka, a visiting fellow at the ECFR, in a policy brief.

BALKAN BLOG: US approach to switch from quick-fix dealmaking to experience and cooperation
Montenegrins say state administration is most corrupt institution
75% of Montenegrins want EU membership