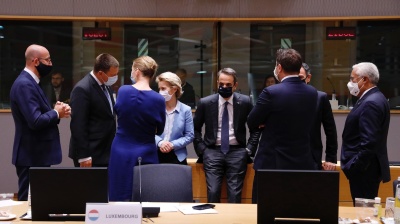 Discussions at the final roundtable of the summit.
By bne IntelliNews July 21, 2020

European Union leaders reached agreement on a massive stimulus plan for the bloc’s economies in the early hours of July 21, after days of intense talks.

The package involves the €750bn Next Generation EU (NGEU) recovery fund, from which grants and loans will be provided to support EU economies hit by the coronavirus (COVID-19) pandemic. The EU plans to borrow the €750bn on international markets.

Agreement on the fund was reached alongside the €1.074 trillion seven-year EU budget (multi-annual financial framework, MFF) for 2021 to 2027.

In total, the package combining the MFF and the NGEU amounts to €1.824 trillion.

“We did it! We have reached a deal on the recovery package and the European budget for 2021-2027. This is a strong deal. And most importantly, the right deal for Europe right now,” tweeted EU Council President Charles Michel as the deal was finally reached.

“Exhausted though we all may be, we are also conscious that this is an historic moment in Europe,” said European Commission President Ursula von der Leyden after the summit concluded. “We find ourselves in one of the most serious of economic and public health crises. And yet, following tough negotiations, Europe has successfully responded in force to this unprecedented crisis. This response draws on the EU budget and combines solidarity with responsibility.”

Chancellor Angela Merkel of Germany, which holds the rotating presidency of the European Council, called the deal a "good signal” for Europe and beyond. "We have set the course for the financial foundations of the EU for the next seven years and at the same time responded to the biggest crisis since the European Union was founded," said Merkel.

The euro reached a four-month high against the US dollar on July 21, and analysts also welcomed the package of measures.

“The agreement of EU leaders on the approval of the EU Recovery Fund, worth a total €750bn, is likely to set a positive tone on CEE FX and debt markets today, as CEE countries will be reaping the benefits from the EU stimulus plan due to their lower incomes per capita,” commented Raiffeisen analysts in a note early on July 21.

“It is good that Europe has proven itself capable of action in the most severe recession of the post-war period … It is also to be welcomed that a higher proportion of the funds is now distributed among the member states according to the actual severity of the recession,” commented Professor Friedrich Heinemann, research department head at the Leibniz Centre for European Economic Research (ZEW) in Mannheim.

The lengthy and often fraught discussions resulted in the longest EU summit since the discussions on enlargement two decades ago.

Some of the deepest divisions that emerged during the talks were between the states hardest hit by the coronacrisis, primarily in southern Europe, and the so-called "frugal four” of Austria, Denmark, the Netherlands and Sweden.

An agreement was finally struck when Michel put forward compromises over the recovery fund, proposing €390bn of the fund should be non-repayable grants, down from the €500bn originally proposed, and the rest repayable loans, Reuters reported.

Casualties of the shift in the EU’s focus to helping its economies recover from the coronacrisis included the green transition; the Just Transition Fund will be scaled down. Despite this, Michel commented that the new EU budget “will be clearly linked to our climate objectives”.

In addition to the high stakes of the talks, Slovenia’s Prime Minister Janez Jansa commented after the talks that the changing dynamic within the EU post-Brexit likely contributed to the length of the negotiations.

"After Brexit, the European Union is different, the balance of power is different, new balances are being established, and perhaps this has further contributed to the fact that it took … days for an agreement to be reached,” Jansa said, according to a government statement.

Another rift opened up over proposals to link funding to the rule of law, which sparked fierce resistance from Central European “illiberal democracies” Hungary and Poland, which have repeatedly clashed with Brussels over the rule of law and judicial reform.

In the event, those on both sides of the debate claimed victory. The prime ministers of Hungary and Poland held a joint press conference after the summit closed, at which they claimed to have prevailed. A statement from the Hungarian government didn’t specify how much the country would receive, but emphasised that both Hungary and Poland had “salvaged their national pride”, by avoiding tying the funding to the rule of law.

Prime Minister Viktor Orban said “the two countries succeeded in making it clear that it is unacceptable that those who inherited the rule of law should lecture and criticise freedom-fighting nations which went through very difficult times and did much to bring down the communist regime,” said the statement.

However, Michel claimed the opposite, stating that the agreement marks “the first time that the respect for rule of law is a decisive criteria for budget spending”.

Poland, the largest economy among the new member states from Central and Southeast Europe, will get a total of €160bn from the 2021-2027 EU budget and the coronavirus recovery fund, which has been welcomed by the government.

The additional funding Poland will receive under the MFF will more than offset any reductions in funding for Poland from the Just Transition Fund. Poland in theory is still to be the biggest beneficiary of the Just Transition Fund, but that’s just theory for now because it is yet to subscribe to the EU’s ambition to become climate neutral by 2050.

Elsewhere in Central Europe, Czech Prime Minister Andrej Babis said his country will receive €35.7bn from the EU budget and be able to borrow a further €15.4bn on advantageous terms within the recovery fund. “The outcome of the EU summit is good for the Czech Republic,” Babis commented.

Slovakia’s Prime Minister Igor Matovic sad the agreement was “great news” for his country too. Bratislava has secured €7.5bn from the recovery fund, and has been allocated €18.6bn under the long-term budget.

Given their small size, the three Baltic states will receive relatively small amounts of funding under the agreement. However, they pushed successfully for more support for farmers, and will benefit from additional funds for the Rail Baltic project.

Estonia is due to get €6.8bn from the long-term budget and receive more than €1.5bn in subsidies from the economic recovery plan Prime Minister Juri Ratas said. Latvia will receive €10bn from the EU recovery fund and multi-annual budget, according to its Prime Minister Krisjanis Kariņs. Lithuania’s President Gitanas Nauseda announced the country will receive €14.5bn in the next financial framework, €1.7bn more than in the 2014-2020 budget period. The country will also be eligible for around €2.4bn in grants and up to €3bn in loans from the new economic recovery fund.

The figure is not far from the amounts previously estimated: €33bn under the NGEU and €45bn under the MFF. The distribution among grants and loans for the NGEU funds, initially supposed to include €20bn grants and €10bn loans, must have changed along with the shift towards more loans in the overall €750bn budget.

Iohannis said that the money will be used "to restore the infrastructure, to build hospitals, schools, to modernise the big public systems." The Romanian Liberal (PNL) government already announced a €100bn public investment plan for the coming decade  on July 1, with most of the money to be spent by the end of 2021-2027 MFF. The financing of the National Investment and Economic Relaunch Plan largely relies on the funds from the European Union. However, the ongoing political uncertainty in Romania calls the validity of the programme into question.

Bulgaria’s Prime Minister Boyko Borissov commented on Facebook that Sofia has managed to negotiate €1bn more than it was hoping to get with the total sum reaching €29bn.

The prime minister secured the sum at a time when mass protests demanding his resignation have been held nightly for two weeks, and on the day of a no-confidence motion against his government in the Bulgarian parliament.

“In the conditions of a severe global crisis caused by the coronavirus and in extremely difficult negotiations, we have defended also the preservation of European funding for cohesion and agricultural policy for our country with the cohesion policy being set at €9bn, which is by €800mn more than the current multiannual financial frame,” Borissov said in a video statement posted on his Facebook profile.

Croatia will bring home €22bn, the country’s Prime Minister Andrej Plenkovic said in a tweet after negotiations ended, “which is a guarantee of a quick economic recovery and further balanced development of the country!” Croatia is set to be one of the worst affected countries by the coronacrisis across the EU this year, according to the European Commission, with only Italy and Spain forecast to have deeper GDP contractions.

Slovenia will get €10.5bn, including €6.6bn of grants, according to Jansa. He said Ljubljana was satisfied with the agreement which was “important not only from a financial but also from a psychological point of view”.