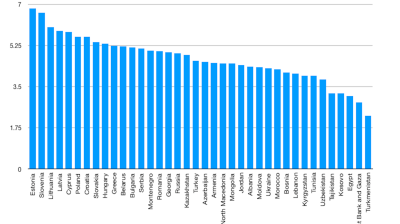 Countries from Central, Southeast and Eastern Europe and the Semed region ranked on the EBRD's 2018 Knowledge Economy Index.
By Carmen Simion in Bucharest, Clare Nuttall in Glasgow March 26, 2019

Estonia, Slovenia and Lithuania lead the European Bank for Reconstruction and Development (EBRD) Knowledge Economy Index, which measures the performance of the 38 economies where the bank invests, alongside the economies of eight frontier innovators, including the US, Germany and Japan, the EBRD said on March 25.

The index is part of the EBRD’s approach to measure countries’ progress according to six qualities of a sustainable market economy: competitive, resilient, green, integrated, well-governed and inclusive. It has four pillars with 38 indicators: institutions for innovation, general skills and specialised skills for innovation, inputs and outputs of the innovation system and the linkages within the system and information communication technology (ICT) infrastructure.

“This is an important initiative which will help our countries identify their strengths and weaknesses in innovation. Such an impartial analysis is a prerequisite for developing policy guidance and targeting our investment," commented Mattia Romani, EBRD managing director, economics, policy and governance.

"There are no one-size-fits-all policies to promote the knowledge economy. Rather, countries should adopt reforms that take into account the stage of their knowledge-economy development," he added.

Estonia ranked first with a total score of 6.82 on a one a 1 to 10 scale, where 1 stands for theoretically least advanced and 10 to theoretically most advanced, followed by Slovenia (6.65) and Lithuania. Indeed the Baltic dominated the top of the table, as the remaining baltic state, Latvia, was in fourth place. The top ranked countries are “not too far from OECD comparators (7.36),” notes the report.

Among the SEE countries, Slovenia was followed by Croatia, which ranked seventh, better than CEE states Hungary and Slovakia. Croatia scored 6.72 on the institutions for innovation pillar. It obtained the lowest score, of 3.81, on the innovation system pillar.

Another outlier is Belarus, which is in 11th position, beating both EU member states Bulgaria and Romania and regional peers Russia and — by a wide margin — Ukraine. Along with Georgia and Serbia, Belarus was one of the “growth champions” between 2011 and 2018.

There were, however, strong improvements among the lower ranked economies. Belarus and Kazakhstan made the largest progress on institutions, said the EBRD, a process "driven by better business environment and higher economic openness.” The top reformers on skills were Uzbekistan and Turkey, while Azerbaijan and Tajikistan improved their innovation system the most.