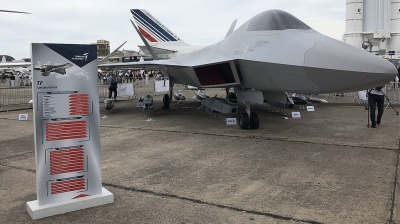 A mock-up of the planned TF-X presented by Turkish Aerospace Industries at the Paris Air Show in June this year.
By bne IntelliNews December 11, 2019

Turkey and the UK agreed a £100mn ($133mn) deal in 2017 to develop Turkish fifth-generation fighter jets. Turkey’s Kale Group then said it was setting up a joint venture with Rolls-Royce to work on aircraft engines for the project—but in March Rolls-Royce said it had scaled back efforts to join the TF-X programme. Talks between Kale and Rolls-Royce appeared to fall into difficulties last year because of a disagreement on sharing intellectual property and the proposed involvement of a Qatari-Turkish company.

After the A Haber interview with Cavusoglu, Reuters quoted a Turkish source as saying that the disagreement with Rolls-Royce stemmed from licensing issues that were “critical and indispensible” for Turkey. But they added that talks had been revived and said Turkey expected the national fighter project deal to advance after a solution was reached.

Cavusoglu's disclosure of the TF-X conversation between Johnson and Erdogan comes at a time when Western arms development and deliveries in relation to Turkey are sensitive matters given the human rights atrocities Ankara has been accused of committing during its invasion of northeast Syria and the Turks' ongoing dispute with the US and Nato over the purchase of Russian military hardware seen as a security threat to vital Nato defence equipment.

The Financial Times reported in March that Rolls-Royce had all but abandoned its attempts to win the aircraft engines bid for the TF-X fighter aircraft after failing to find a compromise with the Turks. It added that the British company’s position was that in order to restart talks Turkey would have to come back “at a very senior level”.
“It is up to [the Turkish government] if they don’t want to work with Rolls-Royce and want to find another solution. We are not prepared to do anything further on that,” a company representative was cited as saying, while also stressing that defence-related decisions often “do take a long time”.

On December 9, US lawmakers in a bipartisan move agreed a version of the $738bn National Defense Authorization Act (NDAA) that prohibits the transfer of F-35 stealth fighter jets to Turkey.

Deliveries of F-35s ordered by Turkey were already indefinitely suspended by US officials in response to Ankara’s purchase and ongoing deployment of Russian S-400 advanced missile defence systems seen as a security threat to the performance data of the aircraft made by Lockheed Martin. Turkey’s participation in the F-35 manufacturing and development programme has also been indefinitely suspended.

Also in the interview with the Turkish broadcaster, Cavusoglu said that “until we produce it ourselves, the alternative to the F-35 could be the Russian market, but we are open to other alternatives too”.

The NDAA expresses a Sense of Congress that Turkey’s acquisition of the S-400s constitutes a significant transaction under US sanctions law. The bill says US President Donald Trump should implement sanctions on Turkey over the acquisition of S-400s. Whether he will or not is open to speculation—Trump has proven rather tolerant of his Turkish counterpart Recep Tayyip Erdogan’s tendency to act contrary to the wishes of fellow Nato member countries and US lawmakers. But worries that meaningful US sanctions could hit Turkey in the near future are mounting on the markets with the Turkish lira coming under some moderate renewed pressure this week which has pushed it past the 5.80-to-the-dollar threshold.

Cavusoglu reiterated on December 11 that any US sanctions would harm US-Turkish ties and would be met with retaliation from Ankara.

“US lawmakers must understand they will get nowhere with impositions. If the United States approaches us positively, we will also react positively. But, if they take negative towards us, then we will retaliate these,” Cavusoglu said.