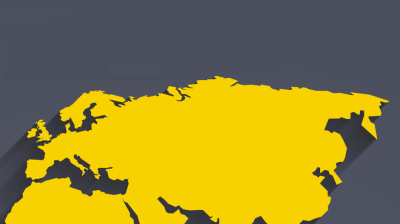 Growth in CEE will slow to an average of 2.4% in 2019 across all EBRD countries, compared with 3.4% in 2018, according to the EBRD’s latest Regional Economic Prospects
By EBRD in London November 6, 2019

The pace of growth in the European Bank for Reconstruction and Development's (EBRD’s) emerging economies is slowing on the back of a weaker global economic outlook, and pressure from slower growth in the Eurozone and China, US/Chinese trade tensions and a contraction in world automobile production, according to a new EBRD report.

A deceleration in EBRD economic growth this year has also reflected continued economic weakness in Turkey and a slowdown in Russia, it says.

The EBRD’s latest Regional Economic Prospects report sees average growth of 2.4% in 2019 across all EBRD countries, compared with 3.4% in 2018.

Next year’s upturn will be driven primarily by a stronger performance in Turkey and Russia. The report predicts steady growth in the EBRD’s southern and eastern Mediterranean region. The outlook sees a strong correlation between growth in emerging Europe and global and advanced European economic trends. It notes that global growth forecasts are currently at their lowest level since the start of the global financial crisis. The eurozone growth outlook is at its lowest since 2013.

“Given its deep integration in ‘factory Europe’ and the importance of the automotive industry for the regions’ economies, emerging Europe is highly vulnerable to weakness in the automotive sector and a further slowdown in Germany,” the report says.

It points out that the Slovak Republic is the world’s largest car producer relative to the size of its population. Other economies in central and south-eastern Europe, such as Hungary, Poland, Romania and Slovenia, are also highly dependent on the automotive industry.

The report says a further escalation of trade tensions and rising global policy uncertainty, including over the United Kingdom’s plans to leave the European Union, constitute major risks to its latest outlook.

Economies in the EBRD regions are particularly vulnerable to a further slowdown in the eurozone, a deeper-than-anticipated slowdown in China and protracted weakness in the automotive sector globally.

The direct impact of a “soft” Brexit on most of the economies in the EBRD regions is expected to be limited. Indirect effects – through weaker growth in the eurozone – are estimated to be much larger in the event of a “hard” Brexit, particularly in south-eastern Europe.

In this region, the slowing momentum in the approximation with the European Union and the latest controversy regarding the prospects for the EU accession for the Western Balkans could have a negative impact on investors’ sentiment and the growth outlook.

The EBRD report sees economic growth moderating in most of central Europe and the Baltic states and south-eastern Europe in line with weakening euro area growth and headwinds to global trade.

After sliding to 0.7% in the first half of this year, because of a hike in value added tax, falling oil prices and weak investment, growth is expected to pick up in Russia as a result of increased public investment spending and a more accommodative monetary policy.

This recovery to 1.1% in 2019 and 1.7% in 2020 still leaves growth below the 2.3% seen in 2018. But the report says the stronger growth momentum in Russia will support growth in eastern Europe and the Caucasus and Central Asia.

The EBRD sees a return to economic growth in Turkey in 2020, after a contraction in 2019 that will probably be smaller than previously expected on the back of credit growth, fiscal stimulus and rising consumer confidence. The economy will probably grow by 2.5% next year after shrinking by 0.2% in 2019.

In the southern and eastern Mediterranean growth is expected to remain broadly unchanged at 4.4% compared with 2018. Continued high growth in Egypt is expected to be driven by high investment and a strong tourism season on the back of reforms in the sector.

Lebanon’s already-bleak outlook is subject to significant downside risks in light of the current political instability and the recent social uprisings. 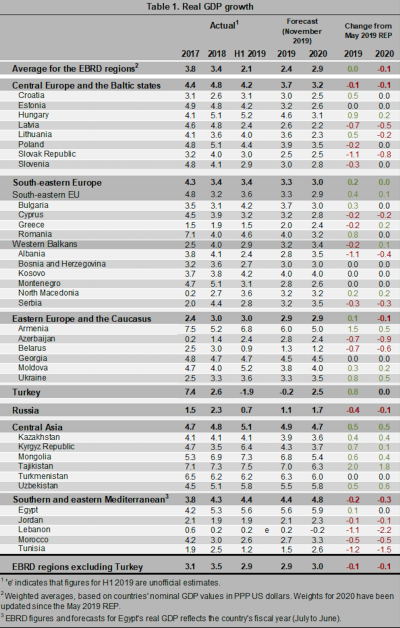