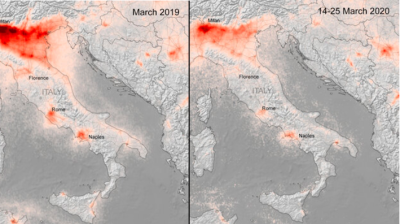 ESA images show a marked decrease in nitrogen dioxide pollution in industrial areas of northern Italy since the coronavirus pandemic intensified, but little impact in the Western Balkans.
By Clare Nuttall in Glasgow March 31, 2020

Countries with major coronavirus (COVID-19) outbreaks have seen a dramatic fall in air pollution as lockdown measures have caused industry to grind to a halt, images shot from space over China, Italy and Spain have shown.

However, in the Western Balkans, where a large share of the air pollution generated locally is from ageing coal-fired power plants, there has not yet been a similar slowdown.

In fact, images from the European Space Agency (ESA) comparing nitrogen dioxide concentrations in March 2019 and March 14-25, 2020 show roughly the same amount of pollution at the main trouble spots in Bosnia & Herzegovina, North Macedonia and Serbia, though there is a slight diminution in Albania, Croatia and Slovenia.

This is in contrast to the significant drop in nitrogen dioxide concentrations in China, France, Italy and Spain, which have some of the world’s severest outbreaks of the virus with 82,447, 39,642, 97,689 and 78,797 cases respectively as of March 30, according to World Health Organisation (WHO) data.

“The Copernicus Sentinel-5P satellite has recently mapped air pollution across Europe and China and has revealed a significant drop in nitrogen dioxide concentrations – coinciding with the strict quarantine measures,” said a press release from the ESA.

Earlier images from NASA and the ESA show a similarly dramatic decrease in air pollution in Wuhan, China, where the coronavirus epidemic was first identified. 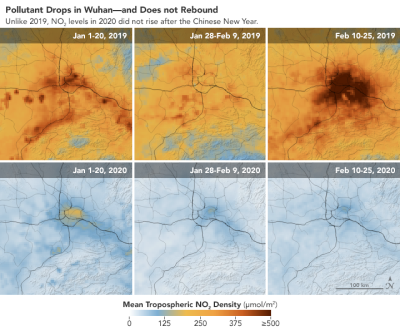 Serbia has introduced strict lockdown measures, taking its cue from the Chinese experience of bringing the virus under control in Hubei and Wuhan. But despite this, the Serbian capital Belgrade was briefly ranked as the city with the worst air pollution worldwide by the Air Visual API website that compiles data from ground sensors, as reported by Reuters on March 27.

The ESA map clearly indicates high levels of pollution from the cluster of power plants — Kolubara A and Nikola Tesla A and B —and other industrial companies around Belgrade. There are air pollution hotspots around the Kosovo A and B power plants in Kosovo. In Bosnia, there is a high level of pollution around the massive Tuzla coal-fired power plant and an industrial area that includes ArcelorMittal’s Zenica factory north of Sarajevo. The area around Montenegro’s Plevija coal power plant is slightly more intensively polluted in March 2020 than in March 2019.

bne IntelliNews correspondents in the region recall that when the pandemic started to spread there was an initial increase in air pollution in major cities, most likely caused by large numbers of people commuting to work in private cars rather than risk infection on crowded public transport. However, this has changed as an increasing number of businesses are shut.

On the other hand, there has been a clear fall in air pollution around the Croatian capital Zagreb and in industrial areas across Slovenia. Nitrogen dioxide pollution in the industrial area around the Albanian capital Tirana has virtually disappeared in March 2020; Albania’s economy is closely linked with Italy’s due to the countries' geographical proximity and the fact it has some of the lowest costs in Europe. As a result, many Italian clothing and other firms outsource to Albania, but, as reported by NGO the Clean Clothes Campaign, many orders are now being cancelled.

Yet the largest share of air pollution in most of the region is linked to burning coal. Five Western Balkans countries — Bosnia, Kosovo, Montenegro, North Macedonia and Serbia — have some of the most polluting coal-fired power plants in Europe.

Air pollution is responsible for up to one in five premature deaths — or the deaths of almost 5,000 people — in 19 Western Balkan cities, according to a 2019 study led by UN Environment. On average, people lose up to 1.3 years of life to air pollution in the region.

An earlier study by environmental NGO Health and Environment Alliance (HEAL) found that ageing coal-fired power plants in the region are a major source of air pollution in the EU, with hundreds of deaths linked to air pollution emanating from the Western Balkans recorded in the worst affected EU members Romania and Italy.

However, there are signs things are beginning to change. Two planned new power plants — an expansion of Plejiva in Montenegro and ContourGlobal’s Kosova e Re in Kosovo — have recently been scrapped, and governments have been looking increasingly at renewables.