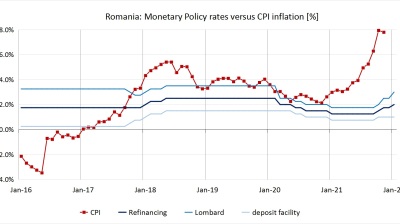 The National Bank of Romania (BNR) hiked the refinancing rate by 25bp to 2.00% at its January 10 monetary board meeting, at the same time widening the interest rate corridor by another 25bp to 1pp.

The BNR thus opted for a moderate approach again, surprising the market in this regard for reasons apparently linked to the uncertain economic recovery. The effects of a more hawkish policy on public financing and the quality of the portfolio of bank loans may have been considered as well.

"The decisions aim to bring back and maintain the annual inflation rate in line with the 2.5% +/=1pp flat inflation target, inter alia via the anchoring of inflation expectations over the longer time horizon, in a manner conducive to achieving sustainable economic growth in the context of the fiscal consolidation process, while safeguarding financial stability," the BNR said.

At the same time, the BNR admitted that the inflation outlook has deteriorated compared to the previous monetary board meeting in November.

“According to current assessments, the annual inflation rate is likely to rise gradually over the months ahead, under the impact of supply-side shocks, exceeding the values shown over this time horizon by the medium-term forecast last November,” the BNR statement reads.

The 25bp rate hike was smaller than bank analysts anticipated, and left Romania with the lowest refinancing rate among its peers.

Banks can rely on overnight funds at the Lombard rate of 3% (2.5% previously) while having at their disposal the deposit facility at an interest of 1% (not changed).

It was the third rate hike by the BNR over the current monetary tightening cycle that started relatively late, in October, and was of a moderate magnitude compared to the inflationary shock.

The causes of such a moderate approach may stem from the disappointing economic slowdown in Q3 (and possibly Q4), as the BNR implies in its statement, but may also reflect the central bank’s decision of deferring the “bad news” (high rates) until there is more visibility on a multitude of issues.

The 150bp combined rate hikes over the three-month period are dwarfed by the nearly 500bop surge in CPI inflation from 3% in January to 7.9% in October. Strictly compared to the CORE inflation (3.4% y/y in January and 4.3% y/y in November), the monetary policy doesn’t look so utterly dovish — but the picture changes when considering the 32% y/y industrial price inflation that will gradually pass through to consumer prices.

The 25bp rate hike of January 10, even considering the interest rate broadening, is visibly undersized by all standards and most of the analysts expected 50bp.

The BNR admitted in the press release that “the annual adjusted CORE2 inflation rate rose somewhat faster than anticipated, up from 3.6% in September to 4.0% in October and 4.3% in November”.

But “annual GDP dynamics saw in Q3 a visibly stronger-than-anticipated decline, i.e. to 7.4% from 13.9% in Q2, while remaining however high from a historical perspective, mainly on the back of private consumption, but also of the unusually large contribution made, in this period as well, by the change in inventories,” the BNR argued at the same time.

Furthermore, “recent developments in high-frequency indicators point to a standstill in economic activity in 2021 Q4, also in the context of the fourth pandemic wave, the energy crisis and supply bottlenecks, entailing the fall in annual GDP dynamics to a significantly lower value than that anticipated in November 2021,” the central bank said.

Primark to launch in Romania as it pursues CEE expansion
Nato rejects Russian request to withdraw from Bulgaria and Romania
OUTLOOK: 2022 Romania