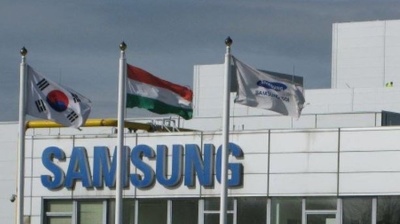 Last month the government designated Samsung’s EV battery plant in God, outside Budapest, as the first special economic zone in the country.
By Tamas Szilagyi in Budapest May 14, 2020

The government has submitted a bill allowing the creation of special economic zones with investments over HUF5bn (€14mn) down from HUF100bn at present, the Prime Minister's Office said on May 13.

The designation of special economic zones will help relaunch the economy, preserve and create new jobs, according to the bill. However, critics fear the regulation will allow the Fidesz leaning political bodies to allocate resources on the basis of political affiliation.

Last month the government designated Samsung’s EV battery plant in God, outside of Budapest as the first special economic zone in the country in a decree, made possible by the extra powers granted to the government and Prime Minister Viktor Orban in late March.

The decision meant that the small town run by opposition Momentum will lose the right to collect the local business tax, which accounted for a third of the town's budget. Instead, it was transferred to the local county assembly, in which the ruling Fidesz party has a majority. This is the case in all 19 counties of Hungary.

The establishment of economic zones in the case of Samsung was for investment value exceeding HUF100bn, which now has been reduced to HUF5bn. Opposition parties fear the government could use this power to exert pressure on them.

The government argues that the bill will allow for a more proportionate allocation of resources within counties as tax revenues from new investments in a small town would be shared by several settlements in the area.

Certain tax revenues of the special economic zones can be used by the county municipality to support developments in the area, especially in the settlements affected by the investment, as well as to support the operation of settlements.

The change does not affect the current system of the ratio of local and central taxes, it does not apply to investments in the capital, in the districts of Budapest or county seats or cities with populations over 50,000, and the state does not deduct a single penny of tax revenue from local governments, the Prime Minister's Office said.