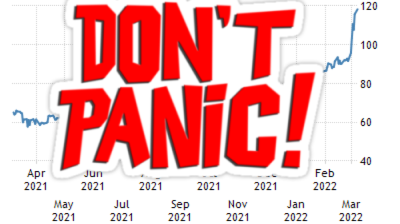 Commodity prices have leapt in the last week, with many setting new all-time highs. / wiki
By bne IntelliNews March 7, 2022

Commodity prices across the board spiked, with many of them setting new all-time highs as the war in Ukraine goes into its second week, with no sign of ending soon.

Oil prices have surged to their highest level since 2008, passing $130 per barrel, which represents a huge windfall for the Kremlin just as the West impounds half of its $643bn of international reserves.

The all-time of $147.50 was reached in July 2008 but some analysts think that mark could be surpassed because of the geopolitical impact of the Ukraine crisis.

“Every $10 rise in oil prices boosts Russia's current account surplus by 1.5 percentage points. So the huge rise in oil prices due to Russia's war, even allowing for self-sanctioning and discounts in Urals crude, is a huge hard currency windfall for Putin,” Robin Brooks, chief economist at the Institute of International Finance (IIF), said in a tweet.

Brooks added that the war in Ukraine will hurt the EU much more than the US because Europe is much more exposed to Russian energy and commodity imports.

“The thing [is] that markets are not pricing this in yet. With ECB policy normalisation still priced on a par with the Fed. It makes no sense, which is why we flagged EUR/$ heading to parity,” Brooks added.

Metal prices were also soaring as investors and business worried about supply distributions and more sanctions.

Nickel price surged up to 60% on March 7 as the peace talks between Russia and Ukraine ended with no resolution. The ruble also broached the psychologically important RUB200 to the dollar mark, more than double its pre-war fair valuation of around RUB70 to the dollar.

Russia is home to about a third of the world’s supply of nickel and PGM (platinum group metals) most of which are produced at Norilsk Nickel in Russia’s far north.

Nickel prices shattered records, hitting $46,850 per tonne on March 7, according to Reuters, and have nearly doubled since Russia invaded Ukraine on February 24.

"We note the large price move in nickel over the weekend and are monitoring all metals closely to ensure market activity remains orderly," the London Metal Exchange said in a statement. "We have further options available to ensure continued market orderliness if these are required," without specifying the nature of those options.

A similar thing happened to aluminium prices following sanctions imposed on oligarch Oleg Deripaska and aluminium producer Rusal banning westerners from holding Rusal assets or doing business with the company: prices jumped 40% in a day, causing the US Treasury Department (USTD) to delay the implementation of those sanctions until eventually they were withdrawn completely – the only sanctions to be applied since 2014 that have subsequently been removed.

Notably because of the pain caused by the spike in aluminium prices resulting from those sanctions, Deripaska and his company have been exempted from the current round of sanctions completely. That didn't stop aluminium prices climbing +3.2% on the day to reach a fresh all-time high of $3,973/tonne after touching $4,000, and palladium soared to another record.

Norilsk Nickel is responsible for 5% of the world's annual production of nickel and 40% of its palladium, as several western companies said they were trying to diversify their supply away from Nornickel and as Fitch Ratings downgraded the company's debt to junk. Sanctions on Nornikel will hurt the electric car businesses, which remains heavily dependent on the company’s PGM production.

Likewise sanctions have been imposed on another metallurgical oligarch Alisher Usmanov, but his companies, including Metalloinvest, have also been excluded.

Copper also hit new highs on March 7, with prices surpassing the recent all-time high above $10,000/tonne last May to set a new record of $10,835/metric tonne. Usmanov also owns the Udokan Copper, the largest copper mine project in the world that recently went into production that was featured by bne IntelliNews in the feature “Copper is the new gold” last year.

After the EU effectively declared economic war on Russia a week ago with a crushing round of extreme sanctions investors are afraid that the Kremlin will retaliate with an equally painful set of sanctions on the West that will cut the latter off from the vital inputs its industries need and which largely come from Russia.

As bne IntelliNews reported, western agriculture is also heavily dependent on Russian fertilisers, the export of which was banned by the Russian government in February as supplies for the domestic market became scarce.

The surging prices for grain and fertiliser in recent months have cast a light on the EU’s dependence on Russia in the agriculture sector. The escalation of fighting in Ukraine will wreak havoc on Europe’s food market.

Fertiliser prices are at their highest since the global commodity bubble in 2008, with the cost of nitrogen fertilisers rising by 253% in Europe in 2021. This cannot be attributed exclusively to the Ukraine crisis – tensions over Ukraine did not begin to peak until late 2021. But they have continued to climb in proportion to the growing forces amassed on the border.

And grain prices have also climbed to a ten-year high. Russia and Ukraine account for almost 30% of the world’s wheat and barley exports between them. European fertiliser production also is highly dependent on Russian gas as a feedstock. And the directors and core shareholders of Europe’s biggest fertiliser producer, EuroChem, are Russian.

The price of wheat smashed its previous record high in European trading last week after Russia invaded Ukraine, putting a question mark on the future of exports from two of the world’s biggest producers of the key commodity.

Wheat soared to €344 ($384) a tonne, far above its previous record of €313.5 recorded late last year, according to the brokerage firm Plantureux & Associates.

US wheat futures have surged past record highs set in 2008. The continuous wheat contract on the Chicago Board of Trade is up 7% to $12.94 per bushel on the US market on March 7. The increase again hit the exchange’s limit for how much the price could move in a day and follows 40% gain in prices over the previous week – the biggest move since 1975.