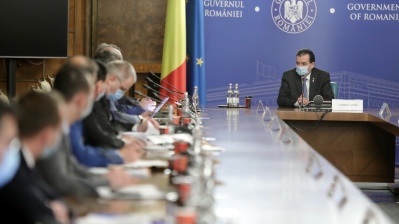 The current pandemic crisis hit Romania in a way similar to many other Eastern European countries. Specific to Romania, however, was the fact that the infection rate was accelerated by the large number of Romanians returning from other developed EU countries such as Italy, Spain, France and Germany, and from Great Britain. This large group of emigrants were labourers in various sectors of those countries such as agriculture, social assistance, construction, hospitals, retail, etc. They simply wanted to get the protection of a more isolated Romanian space than the “hot regions” such as northern Italy or large metropoles such as Paris or London. According to the Romanian government some 1.3mn Romanians decided to come back as of May 2020 and the influx has continued since.

So far, nothing special. However, the Romanian macroeconomic equilibria before the crisis were very fragile, to put it mildly. In November 2019, a new government assumed office with no majority in the parliament, a fact which complicated the economic fragility of the country even more. The new government formed by the National Liberal Party blamed (like in many other cases) the Social Democratic Party for the disastrous inheritance it left, with a much high budget deficit, trade and current account deficits and increasing foreign debt. On top of all of these disequilibria, Romania’s large retired population and the “special pensions” have created unbearable pressure on an already very frail budget.  A few key macro-economic indicators are presented in Table 1 on a yearly basis (2015-2019) and on a monthly basis for 2020 to reflect the pandemic’s impact.

Source: NBR Data and own computations - May 2020; GDP figure from INS for 2019 is provisional and for 2020 is an unofficial estimation, respectively.

A few striking features of the current evolutions could be easily detected. To start with, when looking at the loans to the population and other non-governmental entities granted by banks and other non-bank financial institutions, one could observe the slow pace of increase during the last four months when the pandemic crisis hit Romania in full (see Graph 1). Also, the level of overdue loans started to nudge up due to the evident difficulties of the borrowers to pay the due instalments to the banks. The government also issued guidelines to commercial banks to grant short holidays for repayments to their individual borrowers or to postpone repayments. This picture will be even worse when the full impact of the pandemic is assessed and until such times when the Romanian economy will start to recover. Some international financial institutions (IMF, World Bank, EBRD and others) predicted that 2021 will be a year of growth for Romania assuming that the pandemic crisis will be over for good. As no vaccine is yet available against COVID-19, this could be a heroic assumption. 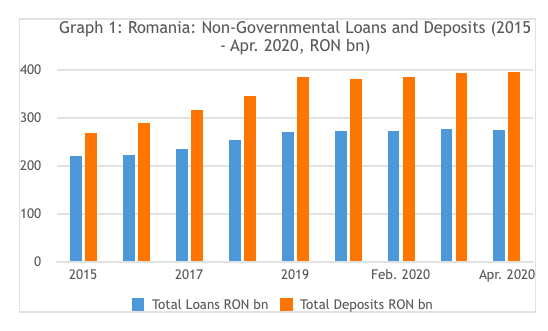 Second, the level of deposits made by the population and other non-governmental entities with banks slightly increased. While such a trend is almost difficult to believe, it has an explanation though. The 1.3mn Romanians returning home brought with them some money which they deposited in foreign currencies with the Romanian banks. The increase of the foreign currency deposits is one of the most unexpected features of the population’s behaviour during this turbulent pandemic crisis. In addition to this, the population was quite prudent in buying white goods such as TV sets, furniture and clothing, which are not immediate needs in such times. The situation could also be explained though “stay at home” measures and the “national emergency status” introduced by the Romanian authorities in April 2020, followed in May by the “alert status” in force up to June 15. Practically all large shopping centres were closed and the acquisition of non-food products by the Romanian population was almost impossible. The modest increase of the population’s savings has been a good development. The government, the National Bank of Romania (NBR) and the commercial banks should implement adequate measures to consolidate such a good trend. The level of interest rates, which should be adequate, and the quality of banking services (including through electronic means) are crucial in this respect. The current attitude of some commercial banks and Romanian politicians that the savers should bear alone the costs of the pandemic crisis is totally wrong.

One other major topic during this pandemic, apart from the health security and restrictions, is the fate of some 5.2mn pensioners which Romania has, out of a total population of 19.4mn residents (23.5mn as of December 1989). The pension system is very unfair with an average pension of RON1,292/month, with two unbelievable extremes of the lowest social pension of RON700/month and RON70,000/month in the case of “special pensions”. The whole of society is now focused on this in the context of a law promulgated in 2018 which stipulates an increase of 40% of all pensions starting on September 1, 2020. Basically, there is no money for such a large increase proposed by the Social Democratic Party in a populist attempt to gain the votes of this large group of voters. As previous attempts to eliminate some special pensions were declared “unconstitutional”, the government needs to focus first on taxation of up to 90% of the special segment. Second, the government should explain to the 5.2mn retired Romanians that a 40% increase is unsustainable. If the increase goes ahead, then next year the increase of expenses from the budget will be of a high magnitude (RON81bn in 2021 alone). Either way, many people will be disappointed.

Finally, all of the above developments put high pressure on another key indicator, namely the foreign debt of the country. Needless to remember that Romania started its transition period 30 years ago with zero foreign debt. Meanwhile, as of end-February 2020 its level surpassed €110bn (see Graph 2). 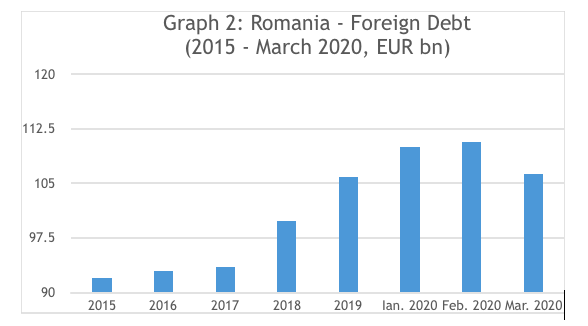 The pandemic will build up the pressure on Romania’s current account even further. Most likely the government will continue to borrow from external markets. According to some analysts this has been made unfortunately at interest rates which are much higher than those of Bulgaria, Poland and Hungary due to the high level of already accumulated debt and the fragility of country’s economic recovery. The ratio of foreign debt/GDP which so far was calculated at 35-45% will increase sharply, especially this year when the Romanian GDP will contract (various projections put this decline to 5% or more).

To control all these macro-economic correlations, Romania needs a set of domestic measures, amongst which are relaunching the economy, developing its infrastructure, agriculture, tourism and IT sectors, stimulating further the savings of the population, taxation of special pensions and manifest prudence in increasing pensions starting with September 1, 2020, improving the education of young generation and many similar long-term measures. However, in the very short term the Romanian authorities and the whole of society should first and foremost focus on the grants and loans offered by the EU (€33bn, of which €19.6bn as grants and the rest as loans) that were allocated for Romania out of the €750bn Recovery Fund against the negative impact of COVID-19). Only by acting together (internally and externally) can Romania succeed.

PANNIER: A very Turkmen coup
9 hours ago
OPINION: Bulgaria sets itself a tough task with Burgas-Alexandroupolis pipeline revival
3 days ago
NEMETHY: Is Ukraine War the beginning of World War III?
4 days ago
RIDDLE: The Russian army in 2023
4 days ago
‘Yesterday’s strategy won’t do’ in Europe’s approach to Iran says Carnegie analyst
9 days ago