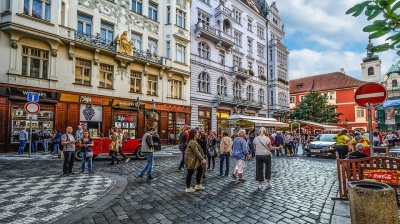 Western Europe is rapidly sliding into recession, but after a five-year-long boom, Central Europe is shrugging off the slowdown.
By Ben Aris in Berlin November 4, 2019

Central Europe is coming out of a five-year-long boom, but the economies of the region are still healthy and what has surprised economists is that the region has managed to shrug off the dramatic slowdown that has gripped Western Europe.

For most of the last three decades, the economies of Central Europe have been closely tied to those of Western Europe, and that of Germany in particular. However, after half a decade of growth and investment the same economies have become increasingly more robust because they are more and more able to support themselves from domestic consumption on their home markets. Germany’s economy in particular is rapidly heading into recession, say experts, but so far that has only had a mild effect on the Central European countries.

“Growth in Central and Eastern Europe (CEE) has held up well in the first half 2019. This is somewhat surprising given the significant slowdown of activity in the Euro area, as most of CEE is highly integrated into the European economy through trade and financial channels,” the Institute of International Finance (IIF) said in a note.  “Euro area growth decelerated due to trade tensions, Brexit, and geopolitical uncertainties, while Germany’s pronounced manufacturing recession stems from country-specific factors as well.

The CEE5 (Czech Republic, Hungary, Poland, Romania, and the Slovak Republic) have been lifted by robust domestic demand that has so far kept growth going, the IIF said.

Germany’s manufacturing recession is gathering pace and as Germany has the largest economy in Europe that kind of development used to be the kiss of death for many of the smaller countries that surround it. Moreover the speed and severity of the German slowdown has come as a surprise to many, says the IIF.

“Not unexpectedly, those CEE countries highly integrated into German value chains have seen industrial production growth slow significantly in recent months. The exception is Hungary, where it has been supported by capacity expansion in the auto industry,” the IIF said. “At the same time, GDP growth in the CEE5 and the overall region remains robust, largely due to strong domestic spending. However, we expect growth to slow across the region in the second half of 2019 and 2020 as a result of Euro area weakness.”

Having said that, CEE stands out in the IIF's most recent Capital Flows Report as the only emerging market (EM) region for which growth forecasts for 2019-20 were upgraded. The rest of the world’s EMs are expected to get caught up in the looming global recession.

On the face of it the CEE5 remain very exposed to Western Europe: 82% of exports in the first half of this year went to EU countries, and of that a bit more than a quarter (28%) went to Germany alone.

But after five years of hard work the region can also fall back on a number of mitigating factors.

Growth in most of the region has been driven by strong domestic demand, in particular private consumption as a result of tight labour markets and high wage growth that is a by-product of the boom. Labour markets across CEE5 are drum tight as these countries look to the east for new sources of cheap labour, and to Ukraine in particular, and that is helping to buoy domestic demand.

Domestic demand contributed more than 4pp to GDP growth in Hungary, Poland, and Romania in the first six months of this year.

Private consumption was strongest in Romania, growing above 6% y/y in the period, supported by substantial increases in wages and public pensions. In Hungary, investment was the biggest driver of growth, accounting for 4.8pp. The only CEE5 country where net exports had a significant negative effect was Romania (largely a result of dramatic import growth rather than weak exports).

And the recession in Western Europe has been selective. It has hit the manufacturing sector, but the Euro area services sector, including Germany, remains healthy. Demand for CEE exports outside of manufacturing, meanwhile, is doing well.

The disbursements of EU structural funds to CEE5 countries are a subsidy that is not dependent on economics. They lift the domestic investment that is one of the three contributors to growth.

And finally, the momentum from the five-year boom means that most of the governments in the region are in robust financial health, giving them the fiscal resources that allow a cushioning of the blow. Booming tax revenues have allowed for higher government spending in some countries of the region such as Poland. That can offset the chilling effects of the slowdown in the west.