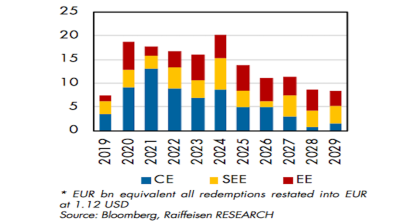 After a series of successful Eurobonds and other debt issuances, the governments of Central and Southeast Europe have already secured most of the funding they need for this year, but with more obligations maturing in 2020 they are expected to return to the markets on a large scale next year, Raiffeisen Research said in a report.

Looking at the amounts raised so far, the CE-4 countries (Czechia, Hungary, Poland and Slovakia) have issued a combined €3.4bn, which is close to the €3.5bn debt maturing this year, says the report.

The figures are even more impressive in other parts of the region: the SEE-4 countries (Bulgaria, Croatia, Romania and Serbia) managed €5.6bn, compared to just €1.3bn of debt expiring this year, while the EE-7 (Azerbaijan, Belarus, Kazakhstan, Russia, Tajikistan, Ukraine and Uzbekistan) raised almost $9bn, several times the $2.2bn of debt maturing during the year.

According to Raiffeisen analysts, the remaining bond redemptions for Central and Eastern Europe this year are quite low at just €7.3bn, though analysts see more issuance potentially from Russia, Romania, Croatia, Ukraine and possibly Poland.

After a very quiet year for bond issues in 2018 the bond market has been active this year as sentiment improves and investors go “risk-on” again, as bne IntelliNews reported in its CEE monthly bond market wrap recently.

However, in 2020, “the maturing debt will jump to €18.7bn and the redemption schedule will remain relatively tough with overall €17.6bn in 2021 too …Overall in CEE the larger redemptions in 2020 speak in favour of issuing more new Eurobonds to help sovereigns rollover the expiring debt,” the report says.

“In particular, CE/SEE countries may also opt for partial pre-funding of their 2020 refinancing needs already in Q4 2019 as the lower cost of funding in developed markets and relatively strong fundamentals and higher rating profile of the majority of CEE should support good investment case for CEE Eurobonds.”

However, Raiffeisen points to changes in the policy mix: “In Poland government targets a reduction of foreign debt share in its total public liabilities down to 24% by 2022 from current 28%, Hungary targets running down foreign debt share down to 10% of the total by 2021. Czech government has chosen to issue domestic euro-denominated securities instead of Eurobonds for refinancing maturing foreign debt.”

Belarus economy increasing well managed, but remains vulnerable to external shocks
1 day ago
TURKEY INSIGHT: With the lira through the looking glass, global finance questions whether Erdogan can sell eurobonds
2 days ago
Tajikistan: Coronavirus brings bonanza of aid, but zero accountability
4 days ago
After reopening, Armenian economy continues to struggle
4 days ago
Misery vs death
8 days ago