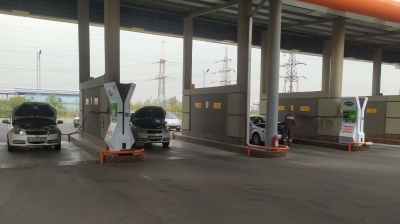 The Uzbek motorist has a mounting headache when it comes to getting from A to B without burning a hole in their wallet.
By bne IntelIiNews October 7, 2021

Unfortunately, stories of gas cylinders exploding on vehicles and causing terrible injuries or worse are far too common in Uzbekistan. But expect them to become even more frequent. Neverending hikes in the price of gasoline charged in the country prompt more and more drivers to hook up cylinders enabling them to reduce their petrol costs with cheaper gas. They recall how under previous president Islam Karimov, prices tended to move up annually by something under 5%. Then they wonder how it is that under successor Shavkat Mirziyoyev—known for his determined attempts to reform the Uzbek economy—prices rose nearly 40-50% in 2017 before growing significantly in each of the following years.

Considering the low wages of the population, people are spending huge amounts just to reach their workplace.

The energy ministry has attempted to explain the situation, saying: "Since 2017, the sale of gasoline has been carried out through relevant exchange trades and, in this regard, is formed according to market principles.”

It added: “Relevant decisions were taken at the level of the president and the government in accordance with policy aimed at liberalising the oil and gas sector and reducing administrative regulation, creating an effective competitive environment.”

But that does not wash with your regular citizen.

A quick survey of ordinary Uzbeks conducted by bne intelliNews encountered multiple complaints that gasoline prices in Uzbekistan have a "constantly rising" tendency.

“Throughout the history of modern Uzbekistan, I cannot name a single day when prices, including gasoline prices, went down. While prices for gasoline used to increase at a relatively slow rate during the first decades of independence, they have had a tendency to surge by leaps and bounds over the past four to five years,” said one.

Another local resident got back to those menacing gas cylinders, saying: "Because of expensive gasoline, people have been forced to switch to gas, but gas is dangerous. You hear of dozens of accidents happening throughout the country linked to the explosion of the cylinders."

The energy ministry came back: “As a result of reforms, the practice of setting gasoline prices has been discontinued, a healthy competitive environment has been formed and the supply of high-quality products at prices acceptable to consumers has been established.”

The first reason for this, in his opinion, was that the price directly depended on imports. According to official statistics, over the past eight months Uzbekistan has imported 281.6mn litres of fuel. Some 729,400 tonnes of gasoline (984.7mn litres) were produced in the country in the period. This means that over 22% of consumption was met by imports.

The second and main reason in Bakirov’s eyes was the lack of competition. The main importer and the only producer of gasoline is the monopolist Uzbekneftegaz. This means that the company retains a monopoly in all areas from production to sales. That’s why, say critics, when world oil prices rise, a similar trend is observed in Uzbekistan. However, if prices fall, they remain unchanged in Uzbekistan.

The third reason mentioned by Bakirov was tax. Gasoline was the most taxable of commodities, he said.