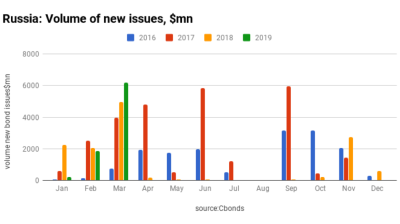 After a slow start in January, Russia got $8.3bn worth of Eurobonds away. Most were issued in March.
By Ben Aris in Berlin April 5, 2019

A window for bond issues swung open at the start of this year after the US Federal Reserve indicated it was not going to continue tightening monetary policy. That switched bond investors to risk-on and yield-hungry, attracting many to Emerging Europe markets.

The top issuer in Europe was Romania. It raised €3bn from three Eurobonds with maturities of seven years (€1.15bn), 15 years (€500mn) and 30 years (€1.35bn) on March 27—the country’s largest combined issue ever, reflecting Bucharest’s need to find financing resources outside the local market where borrowing costs were rising.

Turkey on a roll
Turkey has also been on a roll. It saw its busiest bond week in three years in March as both the government and corporates rushed to tap the market. Issuers were intent on raising war chests of FX reserves – the currency instability that at the end of last year plunged the Turkish economy into recession for the first time in a decade returned at the end of the month.

Russia was also back in the market raising money after a very poor 2018 where demand was hit by four rounds of new sanctions imposed by the US. The danger of more sanctions this year has not disappeared but many investors are prepared to overlook that threat as Russian bonds are rock solid and pay well.

Russia got a total of $8.3bn worth of bonds away in the first quarter, slightly down on the $9.3bn issued last year. There was a very slow January when Russian entities only issued $196mn worth of bonds. However, the Q1 total was ahead of the $7bn worth of bonds Russia issued in 2017 in the same period.

Things picked up significantly in March when Russia issued a total of $6.1bn in one month, well ahead of the $4.9bn it issued a year earlier in March.

The state accounted for half of that after it rushed out its biggest issue in six years. A twin $3bn and €750mn Eurobond issue in March met high demand, mirroring the demand for Russia’s domestically traded OFZ treasury bonds, which have been selling like hot cakes in the past month.

Leading corporates plump for issues
A number of leading corporates also plumped for issues in March. They included fertiliser company EuroChem, steel maker Evraz and leading Russian commercial bank Credit Bank of Moscow (CBOM), which went for its sixth Eurobond issue in the last two and a half years.

More countries are likely to hit the market this year. The big event so far has been Uzbekistan’s debut $3.8bn Eurobond in February. That proved a smash hit and echoed a string of exotic bonds coming from the likes of Belarus and Turkmenistan in 2017, a vintage year for bond issues.

Amongst the anticipated bond issues on the docket is a series expected from Ukraine. Goldman Sachs said in March that Ukraine may issue as much as $6bn in Eurobonds this year. Ukraine has a debt mountain to climb in 2019: it has to pay off, or refinance, $15bn of bonds maturing in 2019 and $21bn in 2020.

How to start a company in Uzbekistan as a nonresident foreigner

Belarus GDP grew by 1.2% y/y in 2019
1 day ago
Jump in Polish CPI confirmed at 3.4% y/y in December
2 days ago
Romania’s external debt rises on chronic wide CA gap
4 days ago
Ukraine consumer inflation ends 2019 at 4.1%
5 days ago
The number of unemployed Czechs reached its lowest level since 1996
8 days ago