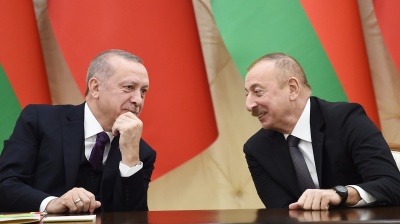 It’s hard to recall Donald Trump uttering a single word of consequence about Armenia, Azerbaijan and Georgia in the South Caucasus and the five Stans in Central Asia throughout his four years in office as President of the United States. Now and again, his Secretary of State Mike Pompeo would pass through, or near, the regions, making some of the right noises about the need to build democracy, but it all sounded rather hollow given the carnage of polarisation that Trump was delivering back home.

Trump was a friend and a gift to strongmen everywhere and his successor Joe Biden has a lot of work to do in rebuilding America’s democratic credentials both at home and abroad. Given the number of pressing crises that he will face from day one, it is doubtful that much of that work will be directed at Russia’s backyard, but his foreign policy team will be at work and there will be certain opportunities to restore Uncle Sam’s influence and good reputation.

Biden, for several decades one of Washington’s most prominent and peripatetic foreign policy figures and a Cold War veteran, personally knows many of the region’s leading figures. In particular, he has in the past devoted much time to the post-Soviet transition of Georgia, and as a senator he spearheaded a billion-dollar aid package for the country following the 12-day 2008 Russo-Georgian War between Georgia and Russia and the self-proclaimed republics of South Ossetia and Abkhazia. In 2009, Biden, by then US Vice-President under Barack Obama, addressed the Georgian parliament, quoting national poet Ilia Chavchavadze and describing the nation as an “inspiration.”

Georgia is presently suffering deep divisions with its parliament dominated by the ruling Georgian Dream Party but boycotted by the opposition parties, who claim last autumn’s general election was fixed. Georgian Dream is sometimes seen by critics as too close to Moscow for their liking, but nevertheless its politicians tend to back the idea that Georgia’s future will eventually lie in European Union and NATO membership. There is room for some support from Washington here, but the cause of Georgia will never be a prime mover in the big picture Biden must attend to.

Three key Biden appointees to watch, as relayed by Eurasianet, are:

Andrea Kendall-Taylor, coming in as National Security Council director for Russia and Central Asia; she has long worked on Azerbaijan and Kazakhstan.

Amanda Sloat, tapped to become NSC director for Europe, which includes the Caucasus.

Nancy McEldowney, nominated as national security adviser for Vice-President Kamala Harris. She served as deputy chief of mission at the US embassies in Baku and Ankara.

“The world has changed a lot since Biden left office, and do these people [and the others on the Biden foreign policy team] recognise that US credibility is shot, that we have a world that has moved in a much more multipolar direction, where it’s really hard for the US to push on democracy promotion given the chaos that we have had here?” said Paul Stronski, a senior fellow in the Russia and Eurasia Program of the Carnegie Endowment for International Peace, a Washington, DC think-tank, in an interview with Eurasianet published on January 13.

Trump’s disengagement with the affairs of most of the outside world – he saved his Twitter-fuelled foreign policy firepower for a few favourite enemies such as Iran, China, Venezuela, North Korea and, occasionally, the European Union – became clear when war broke out in the South Caucasus late last September as Azerbaijan and Armenia entered into what proved to be a bloody 44-day conflict over the Nagorno-Karabakh enclave. Trump seemed barely conscious of the outbreak of war on Europe’s doorstep – his most distinct engagement with it came when he seemed inspired by some Armenian flags being flown by members of the Armenian diaspora at one of his election campaign rallies – and Azerbaijani autocrat Ilham Aliyev, backed and armed by despotic and bellicose ally President Recep Tayyip Erdogan of regional heavyweight and Nato member Turkey, had little reason to worry about how his brutal military campaign would be seen in the White House.

The Biden campaign actually issued a strong statement on the conflict, but the limelight was quickly stolen by Moscow when it brokered a successful ceasefire, following the failure of ceasefires that were partly down to the efforts of France and a not particularly interested Pompeo.

It is just possible that the plain fact of the Biden administration – which includes a couple of senior officials with Armenian roots – may curb Aliyev’s appetite to grab more of Nagorno-Karabakh than he managed to secure during the war, but a strong role for the Biden team in the post-conflict negotiations is difficult to imagine as things stand. Biden may also be able to lean on Erdogan not to interfere in any way that might cause the peace to fail, but for now, Russia, with its 2,000 deployed peacekeepers, has this particular regional showdown in the bag.

Stability (or lack of) in Kyrgyzstan

Looking at the Stans, Kyrgyzstan has just held a presidential election that is supposed to bring stability to the country following the upheaval that broke out over an allegedly rigged parliamentary poll last October, although many observers perceive that the new reality is that an attempted colour revolution was hijacked by a populist strongman – Sadyr Japarov, sometimes known as the “Kyrgyz Donald Trump – who may expose the poverty-stricken country to the priorities and whims of organised criminals. The US embassy in Bishkek has sounded warnings along these lines and, for instance, by using the threat of reduced aid, Biden’s diplomats may be able to exert some influence, but at the same time it will be both Moscow and Beijing that will be pushing Japarov to keep Kyrgyzstan’s house in order in line with what most suits them.

Kyrgyzstan’s neighbour Kazakhstan could also be open to some Biden influence – the stirrings of a push for more democracy brought about surprisingly big countrywide demonstrations during 2019’s Kazakh snap election and the Tokaev administration has ever since been mixing overt and covert strategies in an effort to ensure that the taste for genuine multi-party politics gets nowhere – but again, the US has lost its lure as a mentor on representative government and human rights and the Kazakhs are most concerned about staying on workable terms with Moscow and Beijing given the economic and other imperatives.

Uzbekistan is an interesting prospect for the new US administration as its president, Shavkat Mirziyoyev, is still attempting to move full steam ahead in creating something approaching a market economy, while promising more freedoms for his people further down the road should the economic restructuring work out and give him room for manoeuvre.

As for the aloof Tajikistan and remote Turkmenistan tinpot republics, let’s just see if they ever make the Biden in-tray.