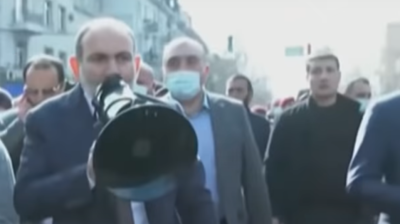 Pashinian, on his way to Republic Square, used a bullhorn as he urged Armenians to put on a big display of people power.
By bne IntelIiNews February 26, 2021

Armenia’s political showdown, in which Armenian PM Nikol Pashinian attempted to rouse masses of supporters to join him on the streets of Yerevan after accusing army officers of trying to mount a coup, delivered something of an anti-climax by the end of February 25.

Neither Pashinian, who perhaps drew around 20,000 people to Republic Square for a speech of defiance, nor the somewhat ragtag opposition, who assembled a rival rally on nearby Freedom Square, looked capable of dealing a decisive blow in resolving the crisis. But there was very little reported violence and that is encouraging to those who remain on edge that Armenia’s troubles could yet descend into a bloody confrontation.

Pashinian may have been told to quit by his political opponents, the president and the church, but the opposition is made up of a bunch of parties struggling for credibility—many of its key players are remnants of, or are linked to, the discredited government that was toppled by the Armenian velvet revolution in the spring of 2018—and the prime minister appears to still be the politician in the country enjoying the highest approval ratings.

And as Pashinian attempted to recharge the wave of people power that swept him to office nearly three years ago, what did the opposition manage in response?

Vazgen Manukyan, one of the opposition leaders, called on people to start blocking the parliament, saying MPs should be brought in to vote for Pashinian’s dismissal.

"Get ready, we will stay here all night and will block the street with barricades," he was quoted as saying by the Armenpress news agency.

However, as the BBC’s Yerevan correspondent reported: “Neither of the rallies managed to gather considerable numbers. The opposition tried to set up some tents next to the parliament but their efforts were not that impressive, considering there were fewer than a thousand people in the vicinity. Around ten tents, a few wood-burning stoves, some makeshift tables with tea and biscuits for the protesters did not look like the sort of threat that might force the authorities to make any concessions.

“Opposition supporters said they were setting up barricades with rubbish bins. But the police had blocked all traffic in the area and kept the parliament building cordoned off, while not engaging with the protesters. A few hours later the police started leaving the area.”

For his part, Pashinian concentrated on driving home the message that any political transition in Armenia must not be at the behest of the military. "The army is not a political institution and attempts to involve it in political processes are unacceptable," he told his supporters, urging all soldiers to simply “do your jobs”.

Pashinian then invited the opposition to hold talks on how to resolve the crisis, emphasising that any change in government must take place "only through elections".

The Kremlin briefed reporters that Armenia’s bust-up was a local affair.

President Armen Sargsyan, not long back from London where he got stranded with a bad bout of coronavirus, appealed to all sides to "show restraint and common sense".

And that was that. We’ll see if enough people stick with common sense tomorrow.

CAUCASUS BLOG: Georgia’s corrupted anti-corruption strategy
CAUCASUS BLOG : What can Biden offer the Caucasus and Stans, all but forgotten about by Trump?
CAUCASUS BLOG: The long and illegal road to Stepanakert