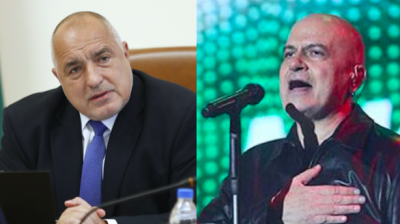 A week after the April 4 general election, Bulgaria seems to have a new ‘saviour of the nation’ in Slavi Trifonov while Prime Minister Boyko Borissov heads for the dustbin of history. However, the new and old faces of the day seem alike, and after three terms under Borissov the country could be heading for more of the same.

Trifonov, a popular showman and TV host, was the unexpected runner up in the election with his party There Are Such People gaining more than half a million votes. As Borissov, whose Gerb party won the most votes, seems unable to form a new coalition, Trifonov might become the next premier.

The TV host, now owner of the 7/8 TV channel, became popular in the early 1990s, shortly after the fall of communism, when he was part of the team that produced the Cuckoo TV show (later renamed Canaletto). A student at musical academy at the time, Trifonov along with the rest of the team were the first to create an independent comedy show after decades during which all broadcasts were controlled by the state.

In 1997 the country faced mass anti-government protests due to the deep economic crisis caused by the Socialist-led government of then prime minister Zhan Videnov. Trifonov, later to become a television talk show host, started playing songs dating from the time of Bulgaria’s struggle for liberation from Ottoman rule at the protests. Subsequently, he became one of the most popular TV show hosts in Bulgaria, with his Slavi’s Show being broadcast by bTV from 2000 to 2019.

In 2019, Trifonov set up his political party, initially called No Such State and renamed There Are Such People after a court’s refusal to register it under the original name. Before that, his show initiated a referendum, which was held in November 2016 along with the presidential election. Voters were asked whether they supported limiting public funding of political parties to BGN1 per year per valid vote received in the previous election, the introduction of compulsory voting in elections and referendums, and changing the electoral system for the National Assembly to the two-round system.

All three proposals were backed a by majority of those who voted, but turnout was slightly lower than in the 2014 parliamentary elections, meaning the quorum was not met.

These three questions were also the clearest political objectives of Trifonov’s party ahead of the April 4 general election. The party has not presented a detailed programme, earning it widespread criticism from opponents and analysts, but that did not stop people from voting for it.

While Trifonov’s next move will determine whether he heads Bulgaria’s next government or brings the country closer to early elections, Borissov, the country’s three-mandate premier, is losing his charm for voters with the support for his Gerb party collapsing. Although gaining slightly above 26% of the vote on April 4, nearly 10 percentage points ahead of Trifonov’s party, which had around 17%, Borissov will most likely fail to find coalition partners to form another parliamentary majority and a fourth government.

For many years, Borissov was Bulgaria’s man of the moment. He started to gain popularity while serving as chief secretary of the interior ministry during the government of Simeon Borisov Saxe-Coburg-Gotha, Bulgaria’s last tsar before the communist era, who was prime minister between 2001 and 2005. Saxe-Coburg-Gotha, along with former communist leader Todor Zhivkov, had been one of the clients of Borissov’s private security firm. On becoming prime minister, he appointed his former bodyguard as chief secretary of the interior ministry, an influential position that Borissov held until he ran successfully for Sofia mayor in 2005.

Borissov, a former firefighter, founded Gerb the following year and the party became the largest Bulgarian party represented in the European parliament just five months later. Gerb went on to win the parliamentary elections in 2009, and Borissov’s first term as prime minister lasted until February when he was forced to step down amid mass protests over high energy prices, low living standards and corruption.

18 months later, after the Socialist-backed technocratic government of Plamen Oresharski, Bulgarians backed Gerb again, albeit with a smaller share of the vote than in 2009. This meant Borissov was able to form a new minority government with support from a mixed bag of rightwing, leftwing and nationalist parties.

The coalition was already starting to splinter when Borissov badly misjudged the 2016 presidential elections, pledging to step down if Gerb’s candidate Tsetska Tsacheva did not emerge as the winner.

After his resignation, however, Borissov won the next snap vote and headed a third government, this time picking a far-right nationalist coalition as Gerb’s partner. However, Borissov’s third mandate was shaken by numerous corruption scandals, months-long anti-government protests joined by thousands of people, several changes of ministers and the coronavirus (COVID-19) pandemic, which led to the demise of his popularity and the subsequent poor showing on April 4.

In the days to follow, he made several proposals, including to back Trifonov’s government by giving him the votes of 10 Gerb MPs, but eventually announced he would give up his seat in parliament. This led analysts to anticipate that he will not fight for a new mandate as prime minister.

More of the same?

Although Borissov’s imminent departure seems like a victory for the protesters who tried through last summer and autumn to force Borissov out, many fear that Trifonov seems like more of the same rather than a true alternative to Borissov.

Borissov was a firefighter and bodyguard before he entered politics, while Trifonov made his name on television, but they also have much in common. Both have controversial pasts with alleged connections to controversial businesses — Borissov has been linked to former insurance company SIK and founded the IPON 1 security agency that specialised in debt collection and provided bodyguards to Bulgaria’s most powerful figures, including the disgraced communist dictator Zhikov, and Saxe-Coburg-Gotha.

Trifonov, on the other hand, was rumoured to have links to Multigroup, a company founded by Ilia Pavlov in the 90s. From the 90s to the present such security agencies as IPON 1 and Multigroup have been widely reported in Bulgarian media to have acted as fronts for racketeering and extortion outfits.

The two are also seen as men with big egos who make all the decisions in their political parties without debates, as well as not being keen to talk openly to the media.

Borissov and Trifonov have had rather good relations in the past and many believed they would form the next ruling coalition. However, Trifonov became a loud critic of Borissov when he became mayor of Sofia. The rift between the two men was partially overcome in 2018 when the prime minister had a rather friendly interview on Trifonov’s show. Critics of the showman said at the time that the interview was very disappointing as Trifonov asked all the right questions to Borissov to help him look good and avoided all inconvenient ones.

His critics have repeatedly said that his style of management and political discourse seem rather similar to those of Borissov and that the country has picked more of the same.

On the other hand, the showman-turned-politician has repeatedly said he would not agree to form a coalition with any of the three traditional parties — Gerb, the Bulgarian Socialist Party (BSP) and the ethnic-Turk Movement for Rights and Freedoms (DPS).

For the time being, Trifonov remains silent and has revealed nothing of his future plans, but all parties in the next parliament except Democratic Bulgaria have offered him support. For now the showman holds all the cards, but it is yet to be seen which he will choose to play.

Tourism’s long road to recovery
6 hours ago
DATACRUNCH: the bne car ownership/age index
23 hours ago
Money laundering pushes up property prices in Western Balkan cities
1 day ago
LONG READ: The first thing the emerging middle classes of New Europe do is buy a better car
2 days ago
Russia’s oil and gas reserves will last for another 59 and 103 years respectively, says natural resources minister
3 days ago