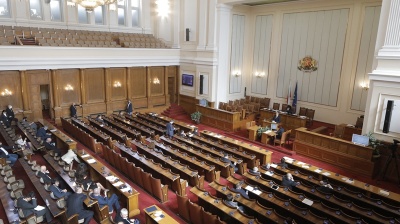 Bulgaria’s MPs voted late on April 6 to ease the restrictions and sanctions imposed in March following the coronavirus (COVID-19) outbreak and decided to donate all their salaries to healthcare system as long as the state of emergency is in place.

Bulgaria declared a state of emergency on March 13 and extended it to May 13 upon the government’s request in an attempt to contain the coronavirus spread.

Although the government and the crisis team had threatened to tighten the already tough restrictions on movement of people, late on April 6 the parliament voted instead to ease them, while Health Minister Kiril Ananiev allowed farmers markets to start working again.

The parliament lowered significantly the fines imposed on people for entering parks or failing to follow any other directions to BGN300 (€153.4) from BGN5,000.

At the same time, Ananiev banned the entry of people from other European states regardless of their citizenship.

Meanwhile, all MPs, ministers and members of political cabinets will donate 100% of their net salaries to the healthcare system. The decision was proposed by the ruling Gerb party and came following a scandal that erupted after MPs attempted to significantly increase their salaries. At the time, parliament speaker Tsveta Karayancheva responded to criticisms by saying critics should be ashamed as the MPs were intending to give the increased salaries to charity.

A few days later, Gerb proposed the cancellation of the wage hike and, during a debate on April 6 it proposed that MPs donate all their salaries to the healthcare system. This was seen as a populist and yet another sharp change of direction by Prime Minister Boyko Borissov in an attempt to back win voters’ approval. Borissov is the leader of Gerb and is known for personally influencing his MPs.

The parliament also adopted the budget revision in its final reading, allowing the government to borrow up to BGN10bn – five times more than the initial plan for the year.

According to Menda Stoyanova, head of the parliament’s committee on budget and finances, a second budget revision is very likely. This revision would be required if the government decides to use a BGN3.6bn buffer. The parliament has allowed it to be spent but has not said on what it should be spent.