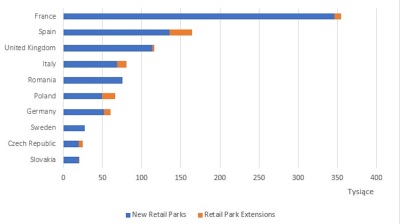 Romania saw the largest amount of new retail park space delivered in 2018 among the countries of Central and Southeast Europe included in a study by Cushman & Wakefield.

During the year 76,000 sqm of new retail park space was delivered in Romania, putting it fifth across Europe in the ranking titled “European Retail Parks: What’s next”, only beaten by major west European economies France, Spain, the UK and Italy.

This put Romania ahead of major Visegrad economies, Poland (sixth), the Czech Republic (ninth) and Slovakia (10th). Together, Romania, Poland and Czechia accounted for 66% of the total retail park market in the region.

Going forward, Poland is set to be CEE's most active market for new retail park developments in 2019-2020, with Romania and Czechia also among the top 10 European countries in terms of anticipated new retail park space.

Across Europe, retail park floorspace increased by 2.2% in 2018, to reach 50.1mn sqm, despite disruption to the market from online retailers. Within that total, 995,000 sqm of new retail park space was completed in Europe, down 15% on 2017. A further 1.4mn sqm of new retail park space is scheduled for opening in 2019/2020. The report notes that “quick and easy construction” and a growing number of smaller developments of under 5,000 sqm are expected to boost the number of openings going forward.

“The report has highlighted that physical retail is very much alive — but it is undergoing a significant evolution because of the growth in online shopping and the out-of-town market is not immune,” said Cushman & Wakefield in a press release.

“However, the retail warehouse market has so far proved resilient, with affordability, flexibility, convenience and accessibility the main attractions for new retail park occupiers and shoppers.”

There are also some significant differences between trends in the eastern and western parts of the continent. Developments in Western Europe remain focused on large cities with strong catchment areas and high pedestrian flows. By contrast, in Central and Eastern Europe, “development is turning to smaller schemes in smaller cities and suburban areas, in addition to secondary and tertiary locations. In countries such as Bulgaria, market conditions are now changing, and retailers are looking to expand in second and third tier cities.”

"There are two stories surrounding retail park development in Europe. In Western Europe, we are seeing the market slowly reach maturity, with many cities now having adequate provision,” commented the report's author Silvia Jodlowski, senior research analyst at Cushman & Wakefield, expanding on this theme. “In Central and Eastern Europe, however, the retail park market is still in its infancy. The relative under-supply of retail parks in the region, coupled with their ability to operate in small catchment areas, indicate further growth potential for the format.”

In Romania, retail park density remains at a low level. However, says the report, “Given the size of towns/cities in Romania – with only one city with a population above 500,000 – retail parks seem to be the most versatile and efficient type of retail. The format works well in larger towns, as well as smaller communities which are unable to accommodate large shopping centres. This is especially true in tertiary cities, such as Roman, Slobozia and Bistrita, where retail parks will be the dominant format for the foreseeable future.”

Aside from Romania, the report points to an acceleration of retail park development in Poland, where around 74,000 sqm of new retail park space was completed last year, a 21% annual increase. At around 8-9% of Poland’s total retail stock, retail park space still lags well behind the average of 20% in Western Europe, leaving plenty of room for catchup, pointed out Malgorzata Dziubinska, associate director, consulting and research, Cushman & Wakefield Poland.

The Czech Republic, while the largest retail park market in CEE, has experienced growing demand for local small retail park schemes serving only their primary town or the closest regional catchment, says Cushman & Wakefield. The report also looks at Slovakia, where interest is supported by demand from consumers in smaller towns and suburban areas who are looking for more convenient shopping facilities.