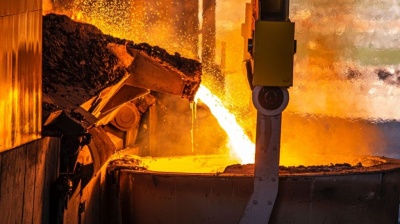 The green revolution has reached steel production, which is a big emitter of GHGs. A leading Russian steel producer Metalloinvest has embraced what will be a new important product group: Green Steal.
By Stephen Bierman of NEO September 10, 2021

The world got its first pilot delivery of carbon-free steel last month, setting a pair of green goalposts for the industry’s future. Progress for the moment and future, all the same, will require changes in production processes, feed stock and fuels.

The first delivery of totally carbon-free steel was still very much in pilot mode in the global context. Costs remain steep, which is the quite legitimate reason all this hasn’t been done previously. Yet Swedish Steel maker SSAB, Swedish Vattenfall and state-owned Swedish miner LKAB announced the delivery of the hydrogen-reduced sponge iron to the Volvo Group, according to their statement. The clean-burning hydrogen was produced using electricity from renewable energy.

The group seeks to deliver fossil-free steel to the market on an industrial scale as early as 2026.

Steel is produced using two methods: the blast furnace-basic oxygen furnace method (BF-BOF) or the electric arc furnace (EAF) method. The BF-BOF method, using coking coal, is the primary process to convert iron ore into processed iron and then into steel. EAF, much less emissive, is mainly used in turning scrap, basic pig iron (BPI) or hot-briquetted iron (HBI) / direct reduced iron (DRI) into steel. Now, EAF mini-mills produce around 28% of world steel, though they account for only 8% of the CO2 generated by the steel industry. At the same time, direct reduction used in the production of HBI/DRI is considered one of the most promising areas to for the development of cleaner metallurgy.

Switching to greater EAF processing will, by itself, be a big step on the route to greener output as emissions are about 1.5 tonnes per tonne of steel, while those from the conventional blast furnace-converter cycle are 2.3 tonnes.

The demand is there for the shift. Steel customers seek cleaner supply chains. Investors are setting standards for cleaner portfolios, something which could, or should, shift a share price premium to cleaner producers if all other things are equal. And finally, the political will to force greener production is evident as the European Union considers border carbon taxes.

The world’s largest iron ore players such as Vale, Rio Tinto, BHP and Fortescue Metals produce iron ore concentrate, which is suitable for the BF-BOF method, consistent with current production. These companies have just announced plans to develop projects to produce feedstock for the EAF method, yet this requires time to get to full-scale production. Shifts in this area may imply greater costs.

Currently, the leading supplier of HBI is Metalloinvest (controls around 50% of global market), a Russian metals and mining company that is heavily investing in the expansion of HBI production facilities. In 2024, it plans to launch two such plants that are already designed to use 100% hydrogen instead of natural gas. The company aims to sell its shares in an IPO in 2022 and analysts anticipate a valuation of over $20bn, as Bloomberg reported last month.

Steel is the most commonly used metal in the world. It’s in everything from cars and construction products, to refrigerators and washing machines, to cargo ships. The industry is responsible for about 8% of global greenhouse gas (GHG) emissions. It will remain front and centre as a target for reduction in global net-zero scenarios.

The first delivery of carbon-free steel shows leadership. At the same time, steel production is a process involving multiple inputs and steps. Cutting emissions is a work in progress. Greater use of EAF and HBI feedstock will do a lot of work towards lower emissions. The demand for cleaner steel is there and taxes on carbon emissions through the production cycle are very likely, so look for the industry to change.