It has become an extremely rare event: on March 24 one of Russia's leading supermarket chains, Lenta, held a successful $225mn secondary public offering (SPO), pretty much the only significant new issue of shares since Lenta IPO'd last year.

The issue went off with a little help from the state backed Russian Direct Investment Fund (RDIF), a $10bn sovereign wealth fund, which was the anchor investor in the new issue.

The RDIF participated in an accelerated placement of global depositary receipts representing newly issued shares in Lenta Ltd. The proceeds will be used to pay for Lenta's rapid store expansion programme across Russia, the fund explained in a statement.

“This placement is notable because it represents strong interest of geographically diverse group of foreign institutions to invest in a leading Russian company despite the challenging market environment. RDIF is pleased to have helped Lenta in sourcing not only Asian and Middle Eastern investors, but a number of major European funds as well," Kirill Dmitriev, CEO of RDIF, said in a statement.

Obviously, investors who bought the new shares hope they will go up, but as our interactive bne:Chart shows, that is unlikely. Russian IPOs have a terrible record: over the last eight years all but six of the 87 IPOs have lost money, and the ten worst are all down by over 90%. Even investors who bought into Lenta's IPO almost exactly a year ago must be disappointed: the company's stock is trading at a 30% loss since its IPO in March 2014. 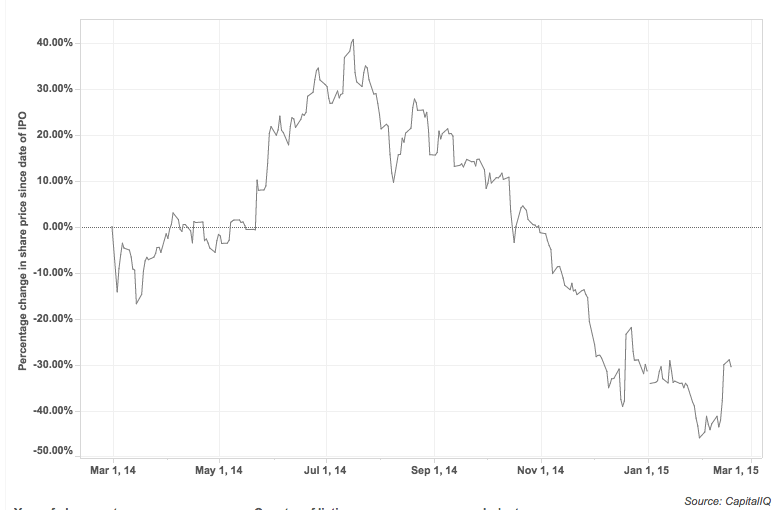 Longstanding investors in Russian shares know that Russian IPOs almost never outperform the market. In the past, owners (and investors) have been greedy and overpriced their stock. They have gotten away with it, as the bulk of Russia's IPOs naturally happened during the boom years that were brought to close by the 2008 crisis.

Now Russia is stuck in an economic and political quagmire, the number of new issues in recent years have been few and far between, and of the 18 IPOs that were held since 2008 all but four have lost their investors money. Interestingly, three of the four were from the tech sector: software engineers EPAM and Luxoft as well as payment service Qiwi. The tech sector is currently the only part of the Russian economy that is flourishing and managing to pique the interest of international investors, based on Russia's 143mn population and the fast growth of internet penetration. The only other company to make investors money was fertiliser producer Acron. 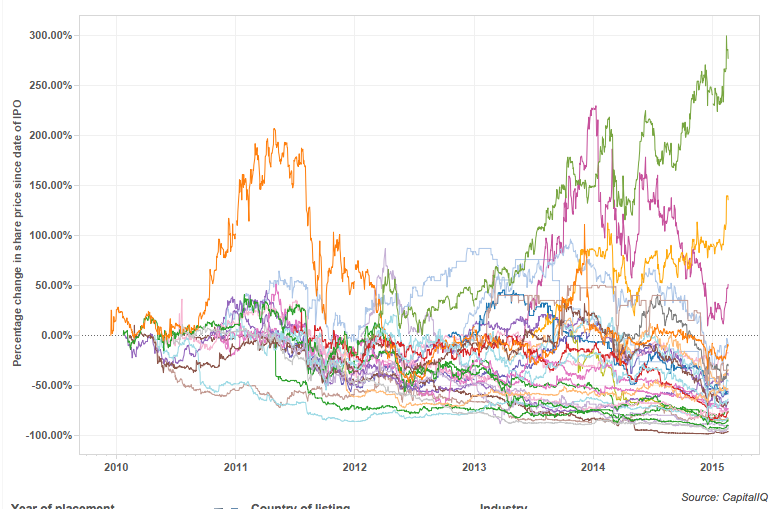 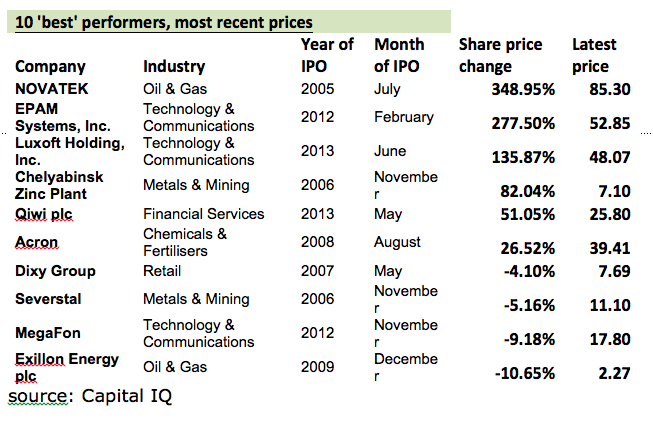 Technology is the only sector in Russia that has produced positive returns for investors, producing an average return of 16% since their IPOs. All the other sectors have lost anything between 8.25% (chemical and fertilisers) to 88% (restaurants).

If four money-makers out of 18 sounds like a poor record for IPOs, actually 2009 to 2014 has been the least risky time to buy into a Russian IPO. As the bne:Chart shows, if you count in all the IPOs since they began in the mid-noughties, you can add only two more names to the money-making list: gas producer Novatek, which IPO'd in July 2005 and is trading at 349% over its offer price; and the Chelyabinsk Zinc Plant, which IPO'd in November 2006 and is trading at 82% over its offer price.

Given almost all of Russia's money-making IPOs have been issued in just the last three years and almost all are tech- or telecom-related, Russia's TMT companies should be rushing to sell shares.