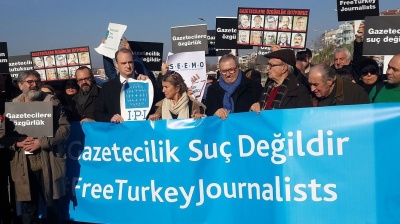 Such scenes have sadly become all too common in Turkey.
By bne IntelliNews June 14, 2019

US-based Bloomberg news agency says Turkish prosecutors are seeking jail terms of up to five years for two of its Istanbul-based reporters over their reporting on last year's currency crisis, The Associated Press reported on June 14.

According to Bloomberg, Kerim Karakaya and Fercan Yalinkilic have been accused of attempting to undermine Turkey's economic stability with a story they wrote in August 2018. It added that prosecutors have charged 36 others for social media comments they made on the story because they deemed them to be critical of Turkey's economy. The article was about the effects of a sharp decline in the Turkish lira and how authorities and banks were responding.

Bloomberg editor-in-chief John Micklethwait condemned the indictment. He defended the reporters for reporting "fairly and accurately on newsworthy events".

He added that the agency will "support them throughout this ordeal".

The first hearing of the trial is scheduled for September 20.

Turkey has for three straight years been the world’s biggest jailer of journalists. In April, Turkey placed 157th out of 180 countries in the World Press Freedom Index 2019 compiled by Reporters Without Borders, two places down on where it finished in the previous year’s ranking.

“Witch-hunt”
The country has seen the “witch-hunt waged by President Recep Tayyip Erdogan’s government against its media critics… come to a head since an abortive coup in July 2016”, according to a short commentary issued with the ranking.

Last year, Turkey’s interior ministry said it had identified 346 social media accounts carrying posts about the exchange rate that it said created a negative perception of the economy, Reuters reported. It said it would take legal measures against them but did not specify what these would be.

In late March, Turkey’s banking watchdog said it had launched an investigation into JP Morgan and other banks over complaints it received after the lira plunged more than 4% in one day and the main share index fell sharply.

The BDDK watchdog said it received complaints that a report JP Morgan published hurt the reputation of Turkish banks and triggered volatility in financial markets. The required “administrative and judicial processes” would be followed, it said.

At the same time that the BDDK made its move, the Capital Markets Board of Turkey (SPK) also said it had launched a probe. The SPK said it had complaints that a JP Morgan report was “misleading” and caused speculation on the Istanbul bourse.

Serbia’s president claims foreign intelligence influence in anti-government protests
2 hours ago
Famous ex-defence reporter arrested, accused of treason
18 hours ago
Turkmen President Gurbanguly Berdimuhamedov takes a holiday as WHO mission finally arrives in Ashgabat
19 hours ago
Violent clashes with police at thousands-strong anti-lockdown protest in Belgrade
1 day ago
Belarus presidential election to have no outside observers, opposition may united by a single candidate
1 day ago