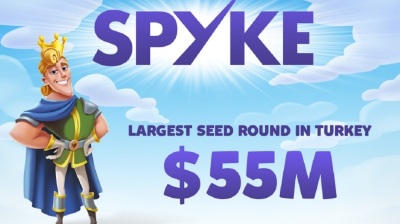 Istanbul-based mobile games developer Dream Games has raised $255mn in a Series C funding round, which valued the enterprise at $2.75bn, the company said on January 18.

The name causing a sensation in the round was the only newcomer, BlackRock (New York/BLK), the largest asset manager in the world.

“99% of our revenue comes from outside Turkey,” Dream CEO Soner Aydemir told CNBC.

Also on January 18, another Istanbul-based mobile games developer, Spyke Games, said that it had raised $55mn in a seed funding round led by US-based gaming investor Griffin Gaming Partners.

In February 2021, Spyke raised $5mn in a pre-seed round, which valued the company at $20mn. Again, the capital came from Griffin.

Spyke was launched in 2020 by former co-founders and executives at Turkish gaming studio Peak Games and US-based Zynga (Nasdaq/ZNGA) and Riot Games.

Phil Anderson, managing director at Griffin, has also joined the board of Spyke.

In 2021, Turkish startups raised a total of $1.4bn worth of funding, including $400mn drawn by game developers.

As of December 14, there were 481 active gaming studios in Turkey. New openings in 2021 to date stand at 72, down from the peak of 109 seen in 2020, according to the latest Games Snapshot by Startups Watch.

In Q3, 69 startups in Turkey raised a total of $150mn in funding, bringing the overall figure in January-September to 206 deals worth $1.4bn, up 49% y/y, according to the Turkish Start-up Ecosystem Q3 2021 report by Startups Watch.

In January-September, a record number of 40 gaming deals were made in Turkey.

In September, Genco Alp, a co-founder of Turkish game developer InGame, told BloombergHT that the company was planning a partnership for the global launch of its Zula Mobil in 2022.

An abundance of cash in the money market due to the pandemic has also reflected positively upon gaming investments, Alp also said.