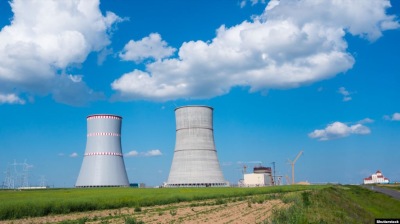 The loading fuel into the 1.2 GW water-water energetic reactor (VVER) at the Ostrovets NPP began in August but now it won't be turned on for two more years
By bne IntelliNews October 11, 2020

Belarus has postponed the full launch of the first reactor at its Ostrovets (aka Astravets) nuclear power plant (NPP) by two years until 2022.

Belarus was supposed to launch the Ostrovets NPP on November 7, according to embattled Belarusian President Alexander Lukashenko speaking on September 16.

Built by the Russian state firm Rosatom and financed by Moscow with a $10bn loan, the project is opposed by neighbouring EU member Lithuania, whose capital, Vilnius, is just 50km away.

The Baltic States worry that the plant will extend Russia’s geopolitical reach by proxy by making them dependent on energy from Belarus, where Russia continues to have a lot of influence. For its part, Russia has been actively exporting its nuclear power technology and currently has some 40 NPP projects under various stages of construction around the world.

Lithuania, Latvia and Estonia are moving to a full decoupling from their Soviet-era common power system by 2025.

Lithuania has already banned all electricity imports from the Ostrovets plant, citing concerns about safety and national security.

Belarus has rejected suggestions that the plant poses a risk and has insisted it meets all safety standards.

The loading of fuel into the 1.2-GW water-water energetic reactor (VVER) at the plant began in August.

Construction of a second reactor is scheduled for completion in 2022 and will double the plant's capacity to 2.4 GW.

bne IntelliNews profiled the controversial plant at Ostrovets close to the Belarus-Lithuania border that is expected to radically alter Belarus’ energy profile, reducing its need to import Russian gas. The plant will meet most of the country’s power needs and has excess capacity that Belarus had intended to export to its Baltic neighbours, but they are refusing to buy power from the plant, which they claim is unsafe.