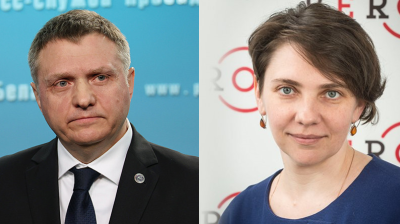 The Belarusian regime is expanding the state authorities' grip on the economy to manage the sanctions pressure. However, this may have inverse effects, and as the regime is unwilling to engage in meaningful geopolitical de-escalation with the West, things will most likely get worse.

The Director of Minsk’s Centre for Economic Research (BEROC), Kateryna Bornukova, believes that the western sanctions imposed on Belarus and Russia in the last two months will hit Belarus much harder than Russia, since foreign demand is not as high for Belarusian intermediate products as for Russian raw materials.

Furthermore, she thinks that the Belarusian regime would worsen the situation since it has a history of responding to previous economic crises with more state control over the economy rather than liberalisation.

According to Bornukova, Belarus current economic crisis is “unprecedented” in the way that it is not mainly characterised by exchange rate devaluation and high inflation but is instead caused by the real sector’s loss of export markets, which is leading to problems with financial settlements.

Many Belarusian companies are going to have a hard time repaying their debt to both foreign and domestic creditors in the near future, and the Belarusian regime is aware of this. During Belarus’ Economy Minister Aleksandr Chervyakov's press conference last Friday (6 May), the seriousness of the western sanctions’ effects to Belarus’ economy were made even clearer.

According to Chervyakov, it was now “necessary to mobilise all the available resources in order to endure and move forward,” and the Belarusian authorities’ most important task today was to focus on “preserving the pace of economic growth at last year's level.”

In contrast to Bornukova, Chervyakov claimed that the high price levels and demand on foreign markets would make this possible.

Apparently Belarus could overcome the sanctions’ negative effects by focusing on the “huge” niched demand which Chervyakov claimed was now appearing in Russia for mechanical engineering products, food and other “conventional exports”, since western companies are leaving the country en masse.

The problem with Chervyakov’s argument is these types of products will only take Belarusian exports so far.

Mechanical engineering and food products on the one hand, and petroleum products and fertilisers on the other, make up between 25-30% each of Belarus’ global exports.

Since early April, Belarus’ two oil refineries have nearly halved their processing due to sanctions and are today mostly refining for the domestic market.

As bne IntelliNews reported on Tuesday, 3 May, Belarus is already facing major problems with reaching its potash fertiliser markets in Brazil, India, the EU and likely also in China due to the western sanctions. Three out of five mines of Belarus’ largest potash producer Belaruskali are rumoured to be closed, with the company even taking out loans to pay salaries.

For mechanical engineering and food products to lift the rest of the economy’s development, the increase will therefore have to be enormous.

The oft trumpeted strong trade bonds between the countries are not as strong as they may seem when it comes to fair competition. Russia has been implementing import substitution programmes in these areas since the early 2010s, which does not bode well for Belarusian companies aiming to increase their market shares, irrespective of whether western companies leave Russia or not.

Moreover, in its latest forecast, Fitch Ratings assumes that the interconnectedness for the Belarusian and Russian economies will contract by 8% this year due to a large drop in general economic activity.

Chervyakov cannot count on simply taking over western companies’ market shares in Russia but will have to take the sanctions’ effects on Russia’s general economic activity and its value chains into consideration as well.

In the first quarter of 2022, Belarus’ year-on-year GDP development dropped by 0.4%. Without a strong export market in Russia, and with its inability to reach other foreign markets due to sanctions; this GDP decrease does not bode well for Belarus’ ability to achieve last year’s surprisingly high GDP growth of 2.3%, which was caused by Belarus being able to take advantage of high commodity prices on the global market.

Instead, Fitch’s latest prognosis of a 5% GDP decrease for Belarus in 2022 looks more probable.

Speaking to the House of Representatives last Wednesday, Chervyakov announced a bill which would manage insolvencies, get rid of inefficiency and preserve production in manufacturing companies and businesses across the country.

The bill expands central and local authorities’ powers to force both state and private companies to rehabilitate rather than shut down by declaring bankruptcy.

With the new bill, a CEO can initiate rehabilitation if an enterprise hasn’t settled its debts for half a year. Then, “a single creditor – a tax body accumulating everything the state budget is owed – will act on behalf of the state.”

During the rehabilitation, “the money will be spent on salaries and pension contributions first. Demands of creditors and banks come second, minus 20% for the benefit of the state budget and court fees.”

Therefore the bill mostly seems like a way for the regime to get rid of foreign creditors and private banks at a discount while ensuring that salaries and pensions are paid and production to some extent maintained – thus exacerbating the country’s already rapidly rising inflation rate.

Belarus’ private banking sector and foreign creditors will be the biggest losers from this new bill, while the regime will probably take over loans from defaulting companies. However, Belarus also needs a lender of last resort, and for Lukashenko that lender is always Russia.

Belarus macro-financial stability is indeed facing an “unprecedented” scenario today. As Bornukova foresaw, the government’s solution to this is stricter financial government control of both the state and private sectors and increased economic exchange with Russia.

Ultimately this will increase government expenditure, preserve uncompetitive businesses and increase exposure towards the increasingly volatile and insecure Russian market – which Fitch Ratings has predicted will shrink.

Last week, Russia granted Belarus a one-year grace period for more than $1bn in loans. However, both Bornukova and Fitch Ratings are uncertain of to what extent Belarus can count on more financial support from Russia both in 2022 and especially in 2023.

While Belarus might manage this year’s payments on its state debt, Belarus’ weak growth prospects, weak international reserve position and inability to earn more foreign currency through exports will make it hard for Minsk to meet its 2023 Eurobond payments.

No clear signs of geopolitical de-escalation are coming from Minsk (but rather signs of escalation), while the only way to significantly relieve pressure on its real sector would be to get rid of western sanctions.

A lower standard of living combined with increased repression will be the only way for him to maintain power, since moving closer to the West and thus decreasing the sanctions pressure means dialogue with the exiled opposition.

Chervyakov’s call to “… mobilise all the available resources in order to endure and move forward,” therefore appears more as a way to prepare the Belarusians for the economic hardship that is to come.

‘We’re barely afloat’ – Alarming comments by Ukrainian officials suggest problems for Kyiv in the Donbas, where Russian troops seek a ‘new Mariupol’
1 hour ago
EU’s credibility on the line over enlargement
14 hours ago
Explainer | Why Tajikistan’s Pamiris don’t trust their government
1 day ago
Meet the latest Russian tycoon to be promoted to the Premier League
1 day ago
Ruble falls to below RUB60/$1, putting pressure on the Russian budget in 2022
1 day ago