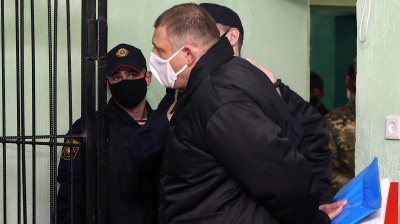 Sergei Tsikhanousky during his trial in December 2021, after which he was sentenced to 18 years in a high-security prison. / Tass.com
By bne IntelliNews June 30, 2022

Following the recent amendments to its law on the death penalty, Belarus could execute over 60 people on terrorist charges. Across the board, the human rights situation in the country is deteriorating rapidly, perhaps because of Lukashenko feeling that his grip on the power is now more threatened than ever.

On Tuesday, 28 June, Belarus’ Security service KGB announced that they would add Sergei Tsikhanousky to its list of “individuals involved in terrorist activities”. The list includes 870 people.

Sergei Tsikhanouvsky is the husband of exiled Belarusian opposition leader Svetlana Tsikhanouskaya, and in December 2021 he was sentenced to 18 years in a high-security prison for: “organising mass disorder, inciting social hatred, impeding the activities of the Central Election Commission and organising activities that disrupted social order.”

He may now face the death penalty along with several other Belarusians for oppositional and anti-war actions labelled as “terrorist activities” by the regime.

Many Belarusians who didn’t want to engage in direct sabotage instead resorted to sending pictures to Belarusian opposition channels, helping the Ukrainian military to map where and when various types of armoured vehicles or missiles were being transported towards Belarus’ border with Ukraine.

These actions by Belarus’ anti-war movement appeared to have caused a considerable headache both for Lukashenko and for Putin, as the KGB arrested 38 railway workers in March for participating in the sabotage acts or aiding the saboteurs. Moreover, the KGB initiated an undercover operation to catch people filming movements of Russian military equipment after Lukashenko’s meeting with Putin in April.

To finally put and end to these opposition activities, Lukashenko ordered an expansion of the law on the death penalty, which extended the law to also cover “preparations” for acts of terrorism and “acts of terrorism committed by an organised group”.

The three men were identified by the Minsk-based human rights organisation Viasna as being Dzyanis Dzikun, Dzmitry Ravich and Aleh Malchanau from south-eastern Belarus. All three are being charged with participating in an extremist group, carrying out terrorist acts, damaging communication lines and high treason.

Therefore, considering the recent changes to the death penalty law, they could all be sentenced to death.

However, it doesn’t stop there. Dzikun, Ravich and Malchanau are only three people out of a total of 60 people arrested for participating in the Railway War. The investigations into the other 57 persons’ actions have not been completed, but many more face the possibility of being sentenced to execution by firing squad already this year.

Although Sergei Tsikhanousky was already in prison when the Railway War commenced, there’s a high possibility that a new investigation of terrorist activities could be opened against him, after which he could also receive the death penalty, perhaps as a personal revenge by Lukashenko against Svetlana Tsikhanouskaya for her continuing lobbying of sanctions against the Minsk regime.

Lukashenko has in general been quite visionless, seeking mostly to play out the West and Russia against each other while maintaining a reasonable standard of living for the people in the country to ensure his grip of power.

However, after the broad engagement of the Belarusian population in opposition activities following the fraudulent 2020 presidential elections, Lukashenko has envisioned a Belarusian society under his personal and his regime’s complete control.

After previous human rights abuses by his regime and sanction rounds by Western governments, there’s always been a form of political thaw in the following years. Now we’re about to enter the second year since the 2020 protests and the repression is still increasing, not to mention Lukashenko’s side-kick role in Putin’s invasion of Ukraine.

In June alone, several people in Belarus have been sentenced, detained or had their court hearings started for having participated in the 2020 protests.

On June 6, court hearings began against the editor-in-chief, former director and former deputy director of the independent news agency BelaPAN. All three are being charged with creating an “extremist group”; since the application of the law on extremism is applied arbitrarily, this could result in prison sentences of anything from 5-20 years in prison.

On June 7, a prominent sociologist from Minsk was sentenced to 30 months in open prison for disrupting social order. Prosecutors have recommended a harsh sentence for a journalist in the same case.

Between April and June, 21 leader of independent trade unions have been detained. The trade unions participated in the 2020 protests and threatened strikes unless Lukashenko agreed to new elections.

Furthermore, they have not stayed quiet while Lukashenko supported Russia’s invasion of Ukraine, with one trade union leader publishing an official statement in March that read “Russia’s War in Ukraine Is Not Our War. We Can Stop it, We Must Stop It!” He was detained a month later.

In a speech on June 10, Lukashenko envisioned the role of civil society in Belarus as being “focused on dialogue with the government, and should be committed to the centuries-old values and traditions of the Belarusian people, the interests of the state.”

Civil society organisations were also not allowed to receive funding from “foreign sources”, which in practice means that they can’t do anything the regime dislikes, or they will find a way to blame them for being foreign spies one way or another.

As over 300 civil society organisations were closed down in Belarus last year and various leaders of civil society movements and initiatives are behind bars, in court or in exile, Lukashenko wants his government to infiltrate and steer all public initiatives in order to ensure that nobody steps out of line.

Government claims three quarters of foreign companies in Russia are still working
6 hours ago
Moldova says it won't be able to make next payment to Gazprom
6 hours ago
Russia resumes oil supplies to Slovakia and Hungary but imports to Czechia remain halted
6 hours ago
US charges Iran operative with plotting to kill former Trump hawk John Bolton
14 hours ago
Ukraine will receive $5.5bn in support from the US later this month
1 day ago