Armenia looks back 100 years, but where to now?

Wrapped in a black wool shawl with bright red roses, her hair tied in a bun, Sujyan Nvard wonders why people are so interested in her. “I’ve become a history star,” she says, moving his hand in a tuft of hair, revealing bright purple, perfectly manicured nails. “I just would love Zveta to be with me, maybe together we could return to Van,” she whispers, touching a faded photograph of her late daughter as a child.

Now 102, Nvard is a survivor – of her beloved daughter and of the hundreds of thousands of Armenians slaughtered by the Ottoman Turks in what is today’s Eastern Anatolia in Turkey. Scholars and dozens of governments call the massacres genocide, a label that the Turkish government has vehemently refuted for a century.

The massacres have cast a shadow over Armenians like the snow-capped Mount Ararat looms on Yerevan’s horizon – so close yet so far beyond the closed border with Turkey. They have become a central marker of collective identity, unifying an otherwise scattered nation.

As dignitaries from all over the world descended on Yerevan to mark the centenary of the killings – French President François Hollande and Russian President Vladimir Putin leading the dignitaries – media coverage and events around the world point to how Armenians’ identity is so entwined with a bloody past. “On the map, Armenia is a small country, but we are a big nation,” Iussi Bioern says proudly, a retired Norwegian energy broker whose father, an orphan from Muş province who survived the massacres, was adopted by a Norwegian missionary in 1917. Now 70, Bioern lives between Oslo and Yerevan. “It took me 60 years to rediscover my heritage, I am proud of being Armenian,” he says touching a little forget-me-not pinned on his jacket.

The flower, a symbol of the centennial, has taken Armenians, at home and abroad, by storm – banners, posters, pins, t-shirts, paper caps, umbrellas, smartphone covers, restaurant menus, paintings on shop windows are emblazoned with the purple bud with a yellow centre. After Kim and Kloe Kardashian wore ones during their visit to Yerevan in early April, the forget-me-not bloomed beyond Armenia’s border.

It also dominated the fields around Mother See of Holy Etchmiadzin, seat of the Armenian Apostolic church, where on April 23 the killed were canonised collectively. 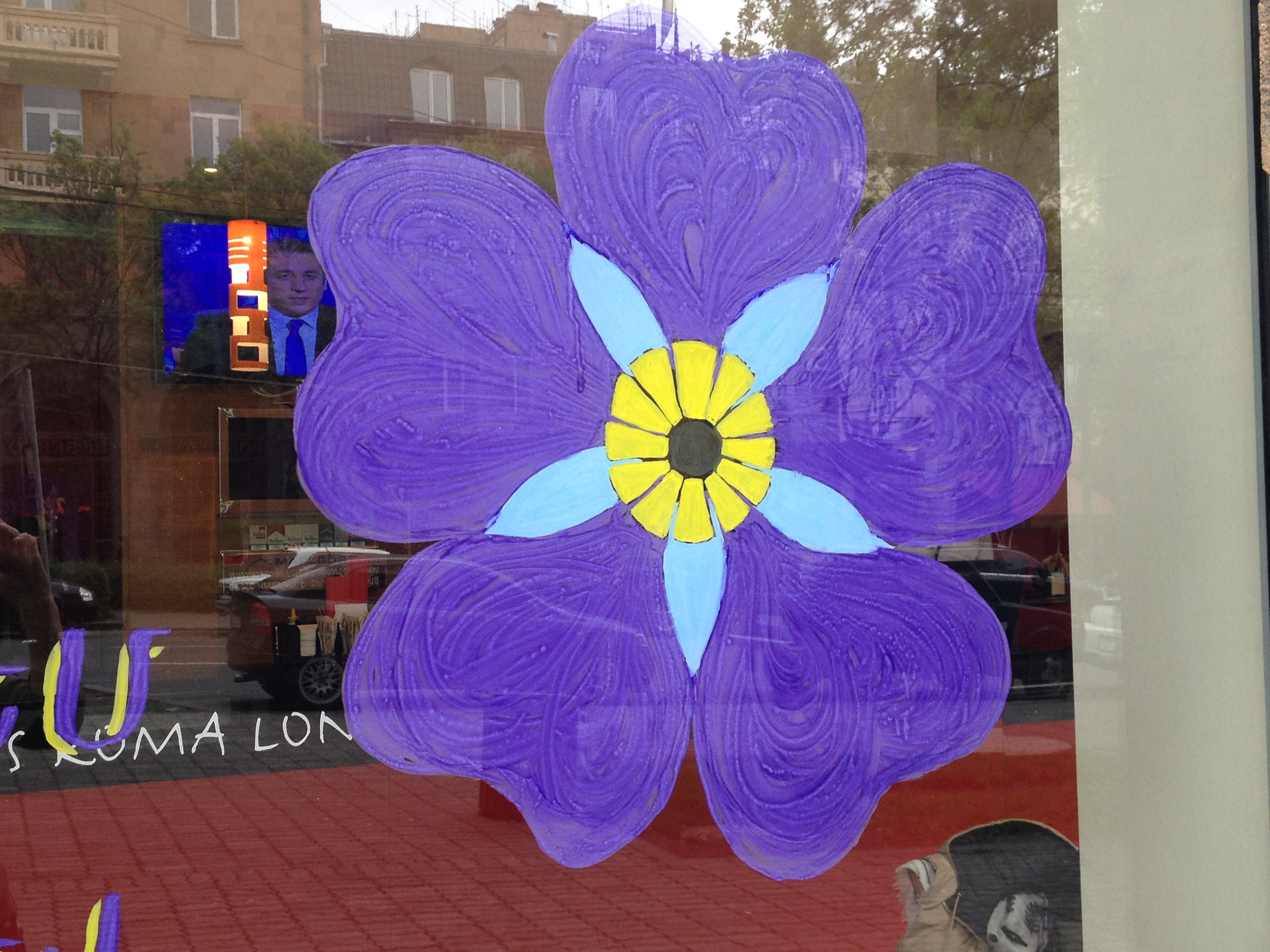 On April 24 raw emotions and a sea of flowers flooded Tsitsernakaberg, the genocide memorial overlooking Yerevan where an eternal flame has commemorated the Medz Yeghern, the Great Crime, since 1967. On April 24, 1915, in the dying days of the Ottoman empire, 250 Armenian intellectuals and community leaders were rounded up and executed in Istanbul, then Costantinopole, kicking off the mass killings of the Armenian minority, mainly living in then Western Armenia, today’s Eastern Anatolia. Over 1.5mn people are said to have died in mass executions, starvation and death marches across the desert towards Syria. Thousand of orphans filled institutes across Europe and the US, creating survivors and generations of their descendants spread across five continents.

Coming to terms with the past has become a battle over semantics. Turkish officials deny there was any systematic attempt to destroy the Christian Armenian population, that the deaths were a result of the tragic realities of war, and that many Turks also died in the turmoil. While public debate in Turkey and among Turkish scholars is stirring, the government remains wedded to a policy of denying genocide took place, fulminating and recalling its ambassadors whenever any governments utter the word. To Turkey’s satisfaction and Armenia’s regret, US President Barack Obama will not follow Pope Francis’ declaration that the killings were “the first genocide of the 20th century,” as did the European Parliament.

Still, olive branches have been held out. Several days before the ceremonies on April 24, Turkish Prime Minister Ahmet Davutoglu issued a written statement of condolence for the Ottoman Armenians who lost their lives. A similar message was delivered last year by the then PM Recep Tayyip Erdogan, now president. Turkey’s EU minister, Volkan Bozkir, attended a commemoration mass at the Armenian church in Istanbul, the first time for a government official since 1916.

In 2009, the two countries signed protocols, brokered by the Swiss and endorsed by the EU and the US, which crucially did not mention the 1915 massacres and created some grounds for optimism for the future. It did not last long – the two protocols were never ratified because Turkey linked them to progress on the frozen conflict over the ethnic Armenian breakaway region of Nagorno-Karabakh in Azerbaijan.

“The Armenian government still maintains a policy of no-preconditions,” explains Richard Giragosian, director of the Yerevan-based think-tank Regional Centre Studies. “Reconciliation is a daunting challenge, but we need to start from normalization – it is about re-opening the [Turkish] border and re-establishing diplomatic relations, without demanding any progress on the genocide issue. Keep the momentum alive and use it to build something new.”

This position, featuring neither territorial demands nor compensation, was confirmed by Armenian President Serzh Sargsyan and is shared by most Armenians in Armenia. A recent study by the Caucasus Research Resource Centre (CRRC) found that 62% of the population favours re-establishing economic ties with Turkey while continuing to pursue recognition of the genocide.

Beyond the current argument over semantics, the Medz Yeghern has defined the Armenian diaspora – stories about the massacres have connected generations of the roughly 10mn Armenians who live abroad, which vastly outnumber the 3mn of their kin who live in Armenia. But some argue this tragic past has also held Armenians back.

In her book, “There was and there was not: a journey through hate and possibilities in Turkey, Armenian and Beyond”, Maline Toumani, an Armenian-American writer born in Iran, wondered whether, “we [Armenians] had lost the freedom to ask questions and pursue ideas that were not framed by the political project of genocide recognition.”

The diaspora were up in arms and slammed her book; for the overwhelming majority of the Armenian diaspora the genocide has been the only issue defining their identity. But that is very different for Armenians who have Turkey as a neighbour. “The issue has become how to contain the damage from the diaspora,” says Giragosian, an American-Armenian whose grandfather survived the killings, and who decided to move from Washington to Armenian in 2006. “Armenia, the country, has to be transformed into the centre of gravity for the diaspora, and it is not. [The diaspora are] much more comfortable in pursuing genocide recognition and hating Turkey [than in] supporting a stronger and democratic Armenia.”

Harsh anti-Turkish voices were certainly loud on the eve of the anniversary. Under a torrential rain, System of a Down, the Californian rock-band whose members are descendants of survivors, thrilled thousands in Yerevan’s Republic Square singing “recognition, restoration, reparation, watch them all fall down.”

Such A-listers of Armenian descent are instrumental in putting the issue under the spotlight – the Kardashians’ visit alone brought more publicity and buzz on the centenary than any government could have done. So is Genealogy, the pop band formed to represent Armenia at Eurovision 2015, whose members come from the five continents and are all of Armenian descent. “Armenia is our genealogy, it is the memories which were passed onto us, but also looking at the future,” explains 28-year-old Japanese-born Stephanie Topalin, during a break in the group’s rehearsal. “We are for the dialogue.”

But the younger generations of Armenians living in Armenia are seeking a new way ahead. “We need to start a new chapter,” thinks university student Iskuhi Baghdasaryan. “Economic relations, open border, cooperation. If we impose pre-conditions, we will never move forward.”

Like many her age, Iskuhi is tired of living in history’s long shadow. The colorful energy of luxury stores and ritzy cafés of Norther Avenue in central Yerevan point to the future.

As today is about looking back, tomorrow will be about looking ahead. “1915 was apocalyptic, we have a moral duty to remember, but we need to turn the page. Today we have a unique opportunity to use this power for building our nation's bright future,” says Bagrat Yengibaryan, head of the Enterprise Incubator Foundation, one of Armenia’s largest technology business incubators. “Being Armenian cannot be only about being survivors.” 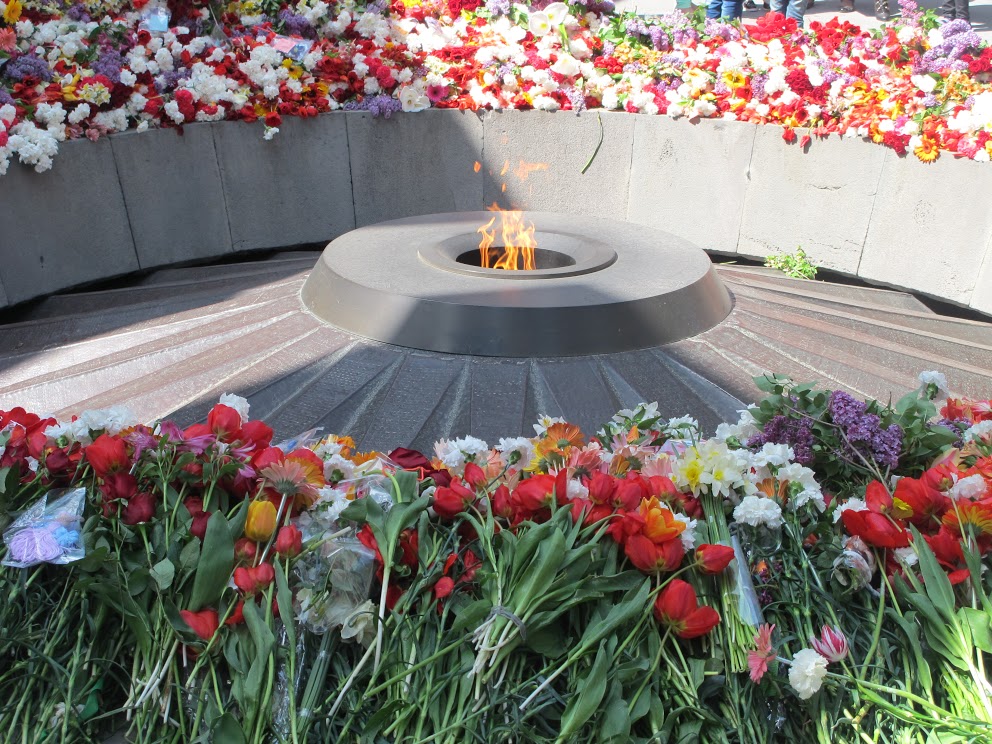