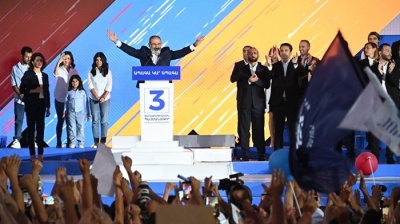 Pashinian at a rally at Yerevan's Republic Square, June 17.
By Neil Hauer in Yerevan June 19, 2021

On Sunday, June 20, Armenians will head to the polls for the most closely contested election in the republic’s 30-year history.

The incumbent Prime Minister, Nikol Pashinian, swept to power as part of a bloodless revolution in early 2018. His mandate was affirmed by a December 2018 election that gave him a massive 70% of the vote, enough to form a majority government with a commanding lead.

A lot has since changed. Most notably, Armenia suffered a devastating defeat against its arch-rival Azerbaijan over the disputed territory of Nagorno-Karabakh, losing swathes of land and around 4,000 dead in a 44-day war last fall. Since then, Pashinian has faced ever-growing discontent and challenges to his power, leading to his decision to finally call snap elections on March 18.

That vote will be held on Tuesday. Pashinian’s primary challenger is Robert Kocharyan, who served as Armenia’s second president (previously the highest office before a constitutional change took effect in 2018) from 1998-2008. Kocharyan, infamous during his time in office for widespread corruption and a heavy-handed approach to dissent, formed an alliance with the Armenian Revolutionary Federation-Dashnaktsutyun and a smaller party and has campaigned on a platform of securing Armenia’s borders. That latter element has taken on extra significance in the past month given the ongoing border crisis in the country that began when Azerbaijani troops occupied two small areas of Armenian territory on May 12. While Pashinian and Kocharyan are only two of a total of 26 political parties and electoral alliances contesting the vote, they have dominated the contest and one of the two will inevitably triumph.

The campaign season, which officially opened on June 7 (though that did not stop a wide array of campaigning beforehand), has seen numerous irregularities. Pashinian has been accused of abusing administrative resources to bus supporters and government employees to his rallies, which he conducted in 45 different towns and cities across Armenia as he took to the road. Kocharyan, meanwhile, has already begun vote-buying in numerous areas, a tactic that was a hallmark of elections during his time in power.

As the vote itself approaches, the result is nearly too close to call. Polling in Armenia is unreliable, and the large number of undecided voters, disgusted with both leading candidates, makes the outcome even less certain. One set of polls, by the Gallup International Association, has shown a consistent growth in support for Kocharyan, with their last poll on June 18 giving the ex-leader a 28.7% share of the vote, against Pashinian’s 25.2%. Their reliability is far from certain, however: they are not associated with the far more well-known Gallup Inc despite their name, while the organisation’s head has links to Kocharyan.

Other electoral analyses paint a different picture. A model by political scientist Rafael Oganesyan, referenced in his interview with Eurasianet on June 17, showed a significant lead held by Pashinian over Kocharyan. Meanwhile, a poll conducted between May 31-June 16 by the Yerevan based EVN Report had similar findings. A total 24% of their respondents indicated that they planned to vote for Pashinian’s ‘Civil Contract’ party, while only 12% indicated support for Kocharyan’s ‘Armenia Alliance.’ Pashinian furthermore dominated Kocharyan outside the capital, with respondents in nine of Armenia’s 10 provinces showing a major preference for the incumbent. Outweighing both of these numbers, however, was the 30% of respondents who said they did not yet know who they would vote for, a segment sizable enough to tip the balance in either direction and leave the outcome unclear.

The result could be close enough that one or multiple other parties on the ballot could play kingmaker in a coalition government (Armenia’s electoral threshold to enter parliament requires a party to receive at least 5% of the popular vote, with the third-highest party entering parliament even if they do not hit the threshold). Prosperous Armenia, headed by the oligarch Gagik Tsarukyan, is widely seen as the likely third-place finisher: they received 8.26% of the vote in 2018 and could lend their support to either Pashinian or Kocharyan in a possible coalition. Bright Armenia, led by the US-educated Edmon Marukyan, could also conceivably pass the 5% threshold: they were the other party to do so in 2018, with 6.37% of the vote. Other contenders to enter parliament are the Republic Party, headed by Aram Sargsyan; the Armenian National Congress, headed by first president Levon Ter-Petrosyan (1991-98); and the ‘I Have Honor’ alliance (affiliated with third president Serzh Sargsyan and his ally Artur Vanesyan).