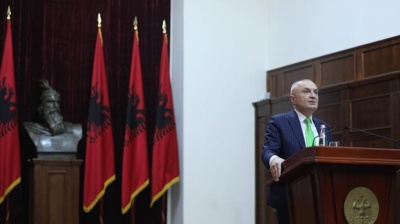 Albanian President Ilir Meta has accused the government of underestimating the level of public debt, saying on January 28 that it has reached the “very worrying level” of 84% of GDP.

Meta’s figure is higher than those of the government, as the finance ministry recently reported that public debt had reached 80.1% of GDP, as well as the International Monetary Fund (IMF) estimating it at 80.6% of GDP.

“The calculation of the debt stock for 2021 should include all arrears of the central and local government, full VAT refund of about ALL24.2bn (€200mn], decisions of international courts in about €405.2mn, and sub-loan liabilities at €62.5mn. The real value of public debt at the end of 2021 can be estimated at more than 84.0% of Gross Domestic Product,” Meta argued at a press conference on January 28.

“At this level of stock again, the cases under consideration in the international courts are not included; new additional outstanding government liabilities that may arise; sub-loan obligations; the growing risk of [public private partnership] PPP portfolio with budget support or unsolicited supply of state guarantees; the risk of exchange rate fluctuations; interest rate risk, which continues to be significant; the risk as a result of the prolongation of the pandemic situation and its unforeseen real effects; as well as the expected effects on the economy, rising fuel and electricity prices,” says the transcript posted on the presidency website.

According to Meta’s data, the total value of PPP projects in 2022 will reach over 45% of GDP. PPP projects are a controversial issue in Albania due to the unsolicited projects that have been launched in recent year, with the company that proposes the project getting an advantage in the tender process.

“Public Private Partnership projects have allowed the government to undertake new clientelistic investments without any immediate increase in reported government spending or debt, at least in the short term. But their off-balance sheet financing results in a lack of transparency regarding future liabilities,” Meta told journalists.

The IMF and other international financial institutions have also criticised the use of unsolicited PPPs.

Meta recommended that the main objective of Albania’s economic policy should be to return the debt-to-GDP ratio to a downward path as soon as possible. “Otherwise, the level of debt in the coming years could cause a serious crisis, endangering the sustainability of public finances,” he warned.