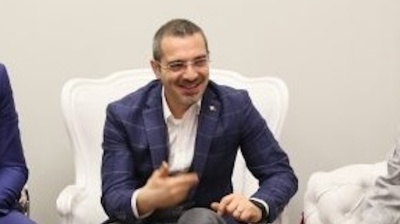 Saimir Tahiri, Albania's longest-serving interior minister, held the post in the Socialist-led government from 2013 to 2017.
By Valentina Dimitrievska in Skopje September 20, 2019

A court in Tirana sentenced ex-interior minister Saimir Tahiri to five years in prison on September 19 for abuse of office in a drug trafficking case.  Tahiri was declared innocent of other charges related to drug trafficking and participation in a criminal group.

The sentence was issued just weeks before EU leaders are due to decide at an October European Council meeting whether to start accession negotiations with Albania and fellow candidate country North Macedonia.

Drug trafficking and organised crime are among the biggest challenges for the Socialist-led government, which was elected for a second mandate following the June 2017 general election. They are also among the main concerns of EU leaders, some of whom have serious concerns about allowing Albania to progress closer to membership of the bloc.

Tahiri, Albania's longest-serving interior minister, held the post in the Socialist-led government from 2013 to 2017, during which time a massive cleanup operation was launched at Lazarat, Europe’s so-called “marijuana mountain” in south Albania.

However, his name has been linked with two brothers, both suspected drug traffickers, one of whom, Moisi Habilaj, was arrested in Italy in 2017. Tahiri admitted they are his distant cousins, but denied all charges against him.

Sensational wiretapped recordings of conversations between Moisi Habilaj and another drug trafficker, Sabaudin Celajt, revealed by Italian media on in October 2017, showed that both spoke with a powerful politician, assumed to be Tahiri.

The investigation against Tahiri was launched two years ago. Tahiri resigned as an MP in 2018 to allow the independent investigation to go ahead, but denied any connections to the alleged trafficking network.

Prosecutors sought a 12-year prison term for Tahiri during the marathon court hearing on September 10.

The former minister was tried in an abbreviated procedure, a concept in Albanian procedural law which allows a trial in an accelerated procedure that does not require the detailed examination of facts that were evidenced during the preliminary investigation. It benefits the defendant by allowing a reduction in their sentence by up to one-third and not allowing the application of a life sentence. Tahiri will probably serve only three years and four months on probation, local media reported.

The former minister is expected to appeal the verdict.

The verdict by judges Ardit Mustafai, Flora Hajredinaj and Irena Gjoka was expected to be issued at 2 pm local time, but was delayed and read out just before 10 pm.