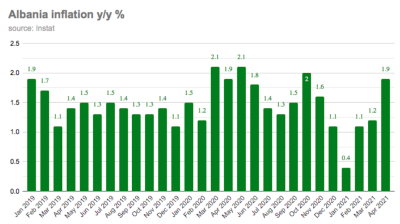 Albania’s Consumer Price Index remained on an upward trend in April with the annual increase in the index at 1.9%, the statistics office Instat said on May 10. The index also rose by a monthly 0.2%.

The annual change in the CPI has been increasing since February after dipping to a low of just 0.4% in January.

The biggest contribution to the yearly change in the CPI in April was from food and non-alcoholic beverages, which contributed 1.51 percentage points (pp) to the overall increase.

Compared to April 2020, prices increased the most for food and non-alcoholic beverages, by 4.5%, followed by communication (3.6%), alcoholic beverages and tobacco (1.7%), recreation and culture (1.3%) and hotels, coffee-house and restaurants (1.0%). The year-on-year increase in prices for other categories was under 1%.

Compared to March 2021, the sharpest increase was for recreation and culture (2.1%), followed by communication (1.3 %). There was a small decrease in prices for health and furniture, household goods and maintenance.

Albania’s inflation has been low and steady in recent years. Last week, the supervisory council of Albania’s central bank, the Bank of Albania, decided to maintain the base rate at 0.5%.

Central bank governor Gent Sejko said on May 5 that the supervisory council considered the current accommodative monetary policy is still adequate to support economic growth and the stable return of inflation to target.

Sejko also noted that “the monetary stimulus will benefit from maintaining the current form of unlimited liquidity injections at fixed price to the banking sector, at least during the third quarter of this year.”

The bank will continue with its accommodative monetary policy stance for the medium term. “Any timely normalisation of monetary policy will be cautious, by neither compromising the stability of economic recovery nor damaging the prospects for inflation to return to target,” Sejko said.

According to the supervisory council’s conclusions, the balance of risks remains on the downside in the term – in particular from a slower than expected movement of the epidemiological station, slower credit growth or a slower response by companies and households to improved financial conditions – while medium-term risks appear more balanced.

Russia's CBR ups rate by 50bp to 5.5%, will keep hiking
1 day ago
Moldova’s headline inflation rises to 3.1% y/y and is going up
2 days ago
Serbian central bank keeps key policy rate unchanged
2 days ago
Public banks’ share in Turkey’s domestic bonds at record high
2 days ago
Romania’s exports up, yet far from narrowing the trade gap
3 days ago