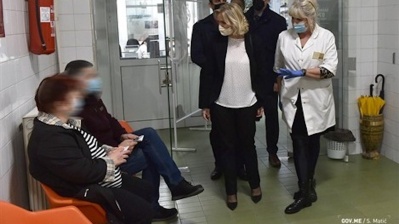 The authorities in both Albania and Montenegro have announced curfews and tough new restrictions amid a rise in coronavirus (COVID-19) infections and fears new variants of the virus will push up cases further.

Montenegro’s authorities decided on February 10 to introduce a curfew and ban intercity travel at weekends as the number of coronavirus cases is rising too quickly and the health system is struggling to deal with the situation.

As of February 11, people will not be allowed to go out between 9pm and 5am, while shops and restaurants will work until 6pm, Igor Galic, director of the Institute for Public Health, said at a press conference.

The Albanian authorities have also set tighter new measures to contain the spread of the coronavirus as the number of new cases has risen sharply. The health ministry reported 1,239 new cases and 16 deaths on February 10 after the daily tally repeatedly reached new record highs earlier this month.

A curfew will be set between 8pm and 6am, while all bars and restaurants will be shut, though they will still be able to make deliveries.

Previously, Prime Minister Edi Rama warned at an ad hoc press conference called to explain the situation to citizens on February 8 about the dangers of ignoring restrictions, such as by failing to wear face masks. Businesses too were told to take more precautions, and Rama warned of increased visits by police should retailers, bars and restaurants fail to observe the rules. “In the coming days we will increase the fines for bars, restaurants [and] shopping malls,” the prime minister said.

Rama also criticised politicians, including those from his own party, who had broken the rules, including by meeting in groups of more people than allowed under the current rules, which he called “irresponsible and unjustifiable”.

“If we do not act now, if we do not react responsibly now, if everyone does not do their job now, the situation risks getting complicated, the number of infections risks growing and definitely the burden on the health system risks being aggravated, in conditions where it is in fact avoidable,” the prime minister said.

Albania has already launched its vaccination programme, and Prime Minister Edi Rama said on February 10 that the country will receive 1.6mn Pfizer vaccines against the coronavirus through the COVAX scheme.

Meanwhile, in Montenegro Health Minister Jelena Borovinic Bojovic said the government expects that the Russian Sputnik V vaccine will most likely be the first to arrive in Montenegro. Bojovic also said that the government’s talks with Pfizer are at the final stage.

A day earlier, thousands of Montenegrins signed a petition calling for Bojovic’s resignation, blaming her for the failure to secure vaccines so far.