ALACO DISPATCHES: US trails Russia and China in Arctic race 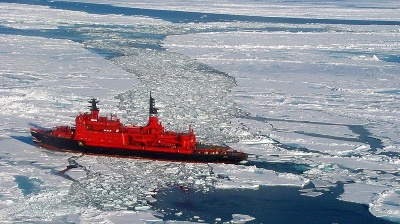 Nuclear icebreaker "Yamal" on its way to the North Pole.
By Rebecca Emerick and Yigal Chazan of Alaco June 5, 2019

As global warming breaks the icy cover of the Arctic, Russia is increasingly collaborating with China in a race to exploit the region’s economic potential, tapping its considerable gas reserves and developing a new shipping channel that could slash the costs of trade between Europe and Asia.

The growing strategic partnership has alarmed the US which has questioned China’s economic interests and called out Russia’s “aggressive” actions in the Arctic. Concern has apparently stemmed from Russia’s growing military presence in the region and China’s use of financial muscle to exert economic influence on the littoral states.

The Arctic alliance between Moscow and Beijing is mutually beneficial with energy-hungry China eager to bolster its gas supplies and use Russia’s Northern Sea Route (NSR), a shipping channel running along the Siberian coast, cutting travel times between China and northern Europe by up to 40%. Russia, meanwhile, needs Chinese finance and technical expertise since international sanctions have squeezed western sources.

On the face of it, the relationship seems equal. But in reality Russia, given its straitened circumstances, is more beholden to China, which has used the dynamic to its advantage.

With the Arctic possessing about a fifth of the world’s untapped fossil fuel reserves, Beijing has supported gas extraction projects in northern Siberia, becoming the main foreign investor in Russia’s attempts to become a leading player in the supply of Liquefied Natural Gas (LNG).

In April, two Chinese state oil majors each acquired 10% stakes in the $20bn Arctic LNG 2, a major new production plant on the Gydan Peninsula, scheduled for launch in 2023. The deals were announced at the Second Belt and Road Forum in Beijing. China already owns close to a third of the $27bn Yamal LNG project on the Yamal Peninsula, currently the principal facility, which came into operation in late 2017.

China’s contribution to natural resource exploration is also significant. In May, a Chinese drilling rig, which has been engaged in the Russian Arctic for over a decade, brought its total discovery of natural gas in the region to 1.2 trillion cubic metres with a large find in the Kara Sea, to the east of the Barents Sea.

Beijing has explicitly linked its $1 trillion Belt and Road Initiative, a series of economic and transport corridors running between China and the West, with the NSR and has channelled foreign direct investment into Arctic littoral states, such as Greenland and Iceland, as part of what it has dubbed the ‘Polar Silk Road’.

For now, the NSR is seemingly the focus of Beijing’s attention, as it will serve as a conduit for both Russian LNG exports to China and Chinese commercial shipping to northern Europe. The channel, which is only navigable for a few months of the year, carried a modest 20mn tonnes of freight last year, but Russia expects the figure to quadruple by 2025. China’s biggest shipper, COSCO, has already indicated that it will make more use of the Arctic route

Should global warming continue to go unchecked, navigation will be possible for longer periods, helping Moscow to achieve its goal. So too will Russian investment in essential infrastructure — including the expansion of a fleet of icebreaking vessels and the restoration of Soviet-era military bases along the shipping lane.

Russia’s administration of the NSR, which sits within its Exclusive Economic Zone, is already quite advanced and controversial. It issues permits for use of the route, requires transiting foreign ships to have a Russian pilot, and reserves the right to refuse passage and employ force to ensure compliance with regulations. The Chinese are also building icebreakers and working with Russia on a joint research centre, part of whose mandate will be to forecast ice conditions along the NSR and provide recommendations for Arctic economic development.

Some commentators have suggested that Russia and China’s cooperation in the Arctic has its limitations. For the moment, so the argument goes, theirs is a marriage of convenience, particularly given Russia’s sanctions-enforced isolation and China’s trade war with the US. But in the long term, tensions may arise if Moscow’s territorial claims begin to clash with Beijing’s desire to derive significant economic benefits.

For the Americans, who have been slow to recognise the strategic importance of the Arctic, their rivals’ growing footprint there is ringing alarm bells. In early May, at the Arctic Council — a body representing littoral states, including China, which holds observer status — US Secretary of State Mike Pompeo railed against both Moscow and Beijing, and dismissed the latter’s claim to be a “near Arctic state”.

Pompeo spoke of Russia’s “pattern of aggressive behaviour in the Arctic”. He described as illegal the demand for foreign ships to request permission to pass through the NSR and threat against those who fail to comply. Additionally, Pompeo said China’s economic investments masked national security ambitions, suggesting that Beijing’s militarisation of the South China Sea could be replicated in the Arctic Ocean.

In what looks like an emerging new ‘Great Game’ in the Arctic, he said that the Trump administration would strengthen America’s presence there, remarks echoed by US National Security Adviser John Bolton also in May. Bolton told US Coast Guard Academy graduates that the service, supported by new icebreaking vessels, will lead the way in “reasserting American leadership” in the Arctic.

Quite how America’s renewed interest in the region will play out is hard to predict. As a major littoral state, the US has legitimate concerns about Russia and China’s accelerating plans. But, notwithstanding its difficult relations with both, constructive engagement will likely be central to ensuring that its economic and security interests are protected.

Rebecca Emerick and Yigal Chazan are analyst and head of content respectively at Alaco. Alaco Dispatches is the business intelligence consultancy’s take on events and development shaping the CIS region.

LONG READ: A thinking exercise on Turkey and its lira
4 days ago
COMMENT: Waking Sleeping Beauty: shaking up Uzbekistan’s banking sector
3 days ago
COMMENT: Will Central Europe’s economic recovery be stymied by populist banking laws?
10 days ago
OPINION: Why the Russian economy will inevitably become green after the COVID-19 epidemic is over
11 days ago
ING: Russia - The curious case of FX interventions
17 days ago