30 YEARS OF TRANSITION: Poland at a crossroads 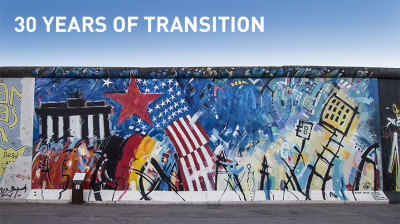 Poland is entering the fourth decade since the fall of communism with polls showing the majority of its people actually do like what has become of their country since 1989.

Back then, the communist party apparatchiks sat down with the democratic opposition — some members of which were political prisoners not so long before — to talk conditions for regime change. The two sides reached a compromise: there would be a partially-free election. Yet, the dynamics that were set in motion quickly eroded the agreement and just over a year later, Poland had its first non-communist government.

It quickly set about planting a market-based economy on the apparently barren soil of regulated prices and state ownership. The loosening of state control over life also led to a rise in crime and began eating away at the traditional way of life, not infrequently to the despair of the Catholic Church, which had been one of the more or less independent institutions that the communists were careful not to crack down on too much.

According to a public opinion poll carried out across Europe between May and August by Pew Research Center to mark the 30 years since the fall of communism, Poles are by and large happy.

Pew asked the peoples of Central and Eastern Europe 10 questions on changes that have taken place in their countries after the communist regimes fell one after another like dominoes between 1989 and 1991.

Poles were the most pleased with their country’s transition to a multiparty system and market economy, at 85% approval for both. They were also very happy about how their living standards have changed, with 81% pointing to improvement.

Yet, in 2015, it was challenging the transition’s outcomes that guaranteed the right-wing populists from Law and Justice (PiS) an unprecedented success. Winning just over 37% of the vote, PiS managed to achieve a majority in both houses of the Polish parliament. Five months prior, the party-appointed presidential candidate Andrzej Duda beat the incumbent Bronislaw Komorowski.

PiS secured another four years in power in the general election in October and Duda is a strong candidate to win the presidency again next May.

PiS recognised what polls like Pew’s did not necessarily capture and forged this into a powerful political narrative. Those disenfranchised by the market reforms exist, the party said. So do those who were alienated, or made resentful, by the perceived sleaze of post-1989 Poland, such as the lack of respect towards Catholicism and the arrival of bold new social movements like the fight for the rights of LGBT people.

But it is not just PiS that has successfully used criticism of the past 30 years for political purposes. Following last October’s election, the resurgent Left introduced a few MPs into the parliament who are perhaps the boldest in Poland today to expose the flaws of Poland’s transition and denounce hard-headed adherence to the neoliberal doctrine that swept through Poland in the early 1990s.

There is also the far-right Konfederacja, which attacks the liberalism of the nineties and the noughties not for the hardships it brought upon so many people in Poland but for turning the country into not much short of a client state of Brussels, the decision-making centre of the EU.

Those are hints that the dominant transition narrative — that of Poland’s overwhelming success — might have nearly run its course. Ideas previously existing on the fringes of the political discourse are making their way to the fore, slowly but surely. From the left-of-centre it is a better welfare system, a tax system in which the wealthy pay more, gender equality, rights of sexual minorities, the “refugees welcome” policy, and so on.

From the far-right, very likely the opposite ideas will flow. PiS, which so far has held a near-monopoly on disputing the post-1989 status quo, will need to answer to challenges posed both by the left and the right.

The great myth of the Polish transition may thus be about to start falling in front of our eyes, but what will fill the vacuum is unclear. That is a big question Poles and their political elites face — but also one they will be able to influence.

With extra pressure added on by an array of big and forceful factors like the intensifying climate crisis, Poland is at a crossroads, getting ready to leave behind what defined it as a post-communist country for good.

This article is part of bne IntelliNews’ series marking the 30th anniversary of the fall of the Berlin Wall. Find more articles from the series here:

Corruption, racism and intolerance in Bulgaria

“I was 30” commercial stirs controversy in Romania

The Czech Republic divided by freedom since 1989

A profound crisis of trust in democracy