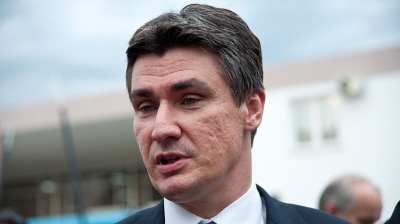 Former prime minister Zoran Milanovic defeated the incumbent Kolinda Grabar-Kitarovic in the second round of Croatia’s presidential election on January 5.

Data from the Croatian State Electoral Commission (DIP) released early on January 6 with votes from 100% of polling stations already counted, put Milanovic on 52.7% and Grabar-Kitarovic on 47.3%.

Milanovic had a slight edge over Grabar-Kitarovic in the first round of voting on December 22 too, but the incumbent was expected to hold onto her position by attracting votes of the third placed candidate, folk singer Miroslav Skoro, in the second round.

The result is a political comeback for Milanovic, whose Social Democratic Party (SDP) lost the 2015 and 2016 general elections to the Croatian Democratic Union (HDZ), after which he stepped down from the SDP’s leadership and announced his retirement.

“If this close but fair victory brought a little faith into this society, I am a lucky man and I look forward to it. Cheers!” Milanovic commented on his Facebook page as the results were announced.

The Croatian presidency is a largely ceremonial position, but the victory for Milanovic, backed by the opposition SDP may put pressure on Andrej Plenkovic’s HDZ-led government that backed Grabar-Kitarovic for re-election.

Croatia is due to hold a regularly general election before the end of 2020. The country — which is the EU’s newest member — also holds the rotating presidency of the EU Council in the first half of the year.

Three major upcoming events during the Croatian presidency are the EU-Western Balkan informal summit in Zagreb in May, agreement on the next seven-year EU budget, and a conference on the future of Europe. The six-month period is also expected to see the UK’s exit from the European Union.