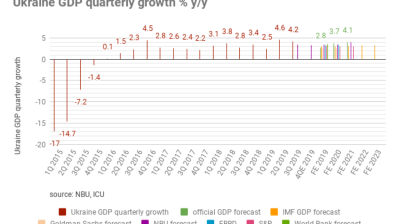 The World Bank has revised upwards its forecast for Ukraine's GDP growth in 2019 from 3.4% year-on-year to 3.6% y/y, World Bank Senior Economist Anastasia Golovach said on November 19.

Ukraine's GDP grew by 4.2% y/y in July-September, which is higher that expected by the nation's central bank.According to the state statistics service Ukrstat, the growth rate stood at 4.6% y/y in the second quarter, at 2.5% y/y in the first quarter.

In October, the regulator revised its economic growth forecast upwards, to 3.5% y/y in 2019 and 2020 and 4% y/y in 2021. "The revision was driven by the sustained domestic demand, higher productivity in agricultural production, and improved consumer sentiment. In the meantime, slower growth in the global economy and worsened terms of trade will weigh on economic growth in 2020," the central bank's statement reads.

The European Bank for Reconstruction and Development (EBRD) believes that Ukraine’s economy remained resilient to political factors but the pace of growth will stay "somewhat modest", with a 3.3% y/y growth in 2019.

The country’s GDP growth will accelerate slightly to 3.5% y/y in 2020, according to the EBRD's Regional Economic Prospects report published on November 6. The booming construction sector and strong real growth in disposable income were among the factors that helped Ukraine weather the turmoil caused by political developments and ongoing geopolitical instability, according to the report.

Hungarian forint slips to all-time low against the euro
22 hours ago
Russia’s industrial output grew 2.1% on the year in 2019 and 8.9% on the month in December
22 hours ago
Polish retail sales accelerate growth in December
1 day ago
Russia's Watcom shopping index ends 2019 on five-year high as consumption recovers
1 day ago
Ukraine’s retail sales up 10.5% in 2019
2 days ago